Amarinder Singh Warns Against Silence Over CAA, Says Germans Regret Till Now For 'Not Speaking Against Adolf Hitler' 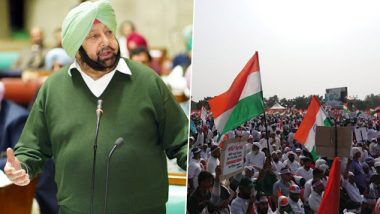 Chandigarh, January 17: Punjab Chief Minister Captain Amarinder Singh on Friday stated that events unfolding around the contentious Citizenship (Amendment) Act bear similarity to the ones witnessed in Germany in 1930s when Adolf Hitler was in power. He also claimed that no lessons have been learnt from history.

Expressing his opinion while participating in the discussion in the state Assembly on a resolution against the CAA, Captain Singh said, as quoted by Indian Express, "You want to change secular fabric of this country. It is very sad what is happening now. We had not even thought of such a thing. We want to break brotherhood merely for politics." Punjab to Move Supreme Court Over CAA: Captain Amarinder Singh.

Asking the opposition to speak against the CAA, Captain Singh urged them read Hitler's 'Mein Kampf’ to "understand the dangers" of the CAA. He said, "Germans did not speak then, and they regretted it, but we have to speak now, so that we don’t regret later."

With the resolution passed in Punjab state Assembly, Shiromani Akali Dal (SAD) leader Bikram Majithi said, "If people have to stand in line and confirm where they were born, then we are against any legislation like this." SAD had voted in favour of the Citizenship Amendment Bill in Parliament in December 11, 2019.

It is to be known that Punjab became the second state after Kerala to pass resolution against the controversial CAA. The Congress-led state government is mulling to move Supreme Court on the issue. Earlier, Kerala Chief Minister Pinarayi Vijayan moved to the apex court against CAA, claiming it to be against the secular fabric of nation. CAA: Punjab Passes Resolution Against Citizenship Amendment Act, Becomes Second State To Do So After Kerala.

After passing the resolution against the CAA, Punjab government had urged the Centre to put on hold the updation process of National Population Register (NPR). The state government in its request had put a stay on NPR until forms or documents associated with it are amended suitably in order to allay apprehensions.

(The above story first appeared on LatestLY on Jan 17, 2020 11:40 PM IST. For more news and updates on politics, world, sports, entertainment and lifestyle, log on to our website latestly.com).