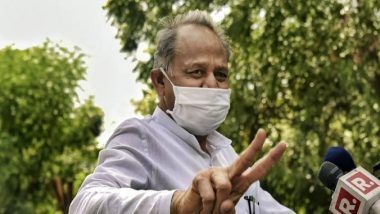 The assembly session comes just a few days after the top leaders of Congress announced a truce between Gehlot and Sachin Pilot. The dissident MLAs have now returned to the party fold. Rajasthan chief minister Ashok Gehlot said it would be "a victory of truth" during the assembly session that began on Friday. With the disgruntled MLAs back in the party-fold, following the intervention of the top leadership, the Congress is likely to pass the floor test. Sachin Pilot Meets Rajasthan CM Ashok Gehlot, Arrives at His Residence For Key CLP Meet; Watch Video.

The Supreme Court earlier reportedly allowed six BSP MLAs who switched to Congress to join the Assembly session. However, the Mayawati-led party issued a whip asking the legislators to not vote in favour of the Congress during a vote of confidence or any other proceedings in the Rajasthan Assembly.

Ashok Gehlot and Sachin Pilot shook hands on August 13 as they met for the first time since their public clash. The heightened political drama between the two leaders had brought the Congress government in Rajasthan to the verge of collapse.

(The above story first appeared on LatestLY on Aug 14, 2020 01:45 PM IST. For more news and updates on politics, world, sports, entertainment and lifestyle, log on to our website latestly.com).