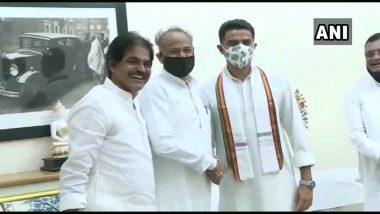 Jaipur, August 13: Over one-and-a-half month after former Rajasthan deputy chief minister Sachin Pilot rebelled against the Ashok Gehlot-led government in the state, he met the Chief Minister at his residence on Thursday. A video released by news agencies showed the two leaders warmly greeting each other.

Pilot arrived at Gehlot's residence for the Congress Legislative Party (CLP) meeting, which will be attended by all MLAs of the party including the 19 legislators who had rebelled last month. Forget and Forgive, Ashok Gehlot Tells MLAs Upset Over Sachin Pilot's Return.

The meeting was called by Gehlot at his residence to finalise the strategy to be enacted in view of the trust vote in Rajasthan assembly tomorrow. The Bharatiya Janata Party (BJP), which called its legislative meeting earlier today, announced that a no confidence motion would be moved in the House tomorrow.

Congress Legislature Party meeting to take place here, ahead of the special session of the #Rajasthan Assembly tomorrow. pic.twitter.com/0Wc60ED1jc

The political crisis in Rajasthan had erupted after Pilot, along with 18 other MLAs, had rebelled against Gehlot last month. He shifted base to Delhi, whereas, the legislators backing him were flocked together at two hotels based in BJP-ruled Haryana.

Pilot was sacked as the deputy CM, whereas, all the rebel legislators were issued show-cause notice by the Speaker. While the party was expected to sack them following a trust vote, a sudden truce was reported earlier this week with Pilot meeting senior Congress leaders Rahul Gandhi and Priyanka Gandhi Vadra on Monday.

(The above story first appeared on LatestLY on Aug 13, 2020 05:35 PM IST. For more news and updates on politics, world, sports, entertainment and lifestyle, log on to our website latestly.com).