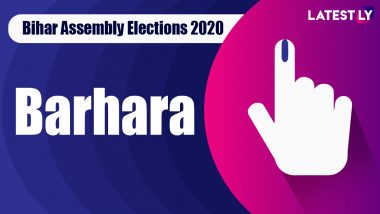 The Election Commission of India (ECI) on September 25 announced the election schedule for Bihar. Voting for the Barhara election was conducted on October 28 in the first phase of Bihar Assembly Elections 2020. Counting of votes for the Bihar polls took place on November 10. Polling for the 243-member Bihar assembly was held in three phases. The voting for the first phase of assembly elections in Bihar took place on October 28 in 71 constituencies.  Bihar Assembly Elections 2020 Dates And Schedule: Voting in 3 Phases on October 28, November 3 and 7, Poll Results on Nov 10.

The Bihar Assembly Elections 2020 was the first major polling exercise since the outbreak of COVID-19 in India. The BJP is contested 243-seat assembly elections in alliance with Nitish Kumar's Janata Dal-United (JDU) as part of 50:50 seat division formula. The saffron party contested on 110 seats, while the JDU will field its candidates on 115 seats.

The Congress, a part of the Mahagathbandhan alliance in Bihar, contested on 70 out of the 243 seats. As per the seat-sharing pact finalised, the RJD fielded its candidates on 144 constituencies, and the Left Front comprising of CPI, CPI(M) and CPI-ML contested in 29 assembly seats. The term of Bihar assembly will end on November 29.

(The above story first appeared on LatestLY on Oct 19, 2020 08:47 PM IST. For more news and updates on politics, world, sports, entertainment and lifestyle, log on to our website latestly.com).