Bihar Assembly Elections 2020 Schedule to be Announced Today; Here's A Look at 2015 Poll Results And Current Strength of JD(U), RJD, BJP and Congress

Ahead of the EC's announcement on the Bihar assembly elections 2020 schedule, here's the result of the previous assembly polls. 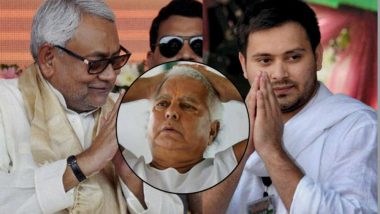 Patna, September 25: The Election Commission of India will announce the schedule for the Bihar assembly elections 2020 today. The Bihar Legislative Assembly has 243 seats. The term of the current Legislative Assembly session will end on November 29. The contest will be between the JD(U)-BJP coalition and the grand alliance of opposition parties, including RJD and Congress. Ahead of the EC's announcement on the Bihar assembly elections 2020 schedule, here's the result of the previous assembly polls and the current strength of parties in Bihar assembly. Bihar Assembly Elections 2020: Tejashwi Yadav Not Acceptable as Leader, 'Mahagathbandhan' Will Break Before Polls, Says Ram Kripal Yadav.

When the results of 2015 Bihar assembly polls were announced, Lalu Prasad Yadav's RJD emerged as the single largest party winning 80 out of 243 seats. Nitish Kumar's JD(U) bagged 71, whereas the Congress secured victory on 27 seats. The grand alliance of RJD, JD(U) and Congress together had 178 seats, 56 more than the majority mark of 126 in the 243-member assembly. The BJP won 53 seats and its three allies added six more seats, taking its tally to 59.

In 2019, bypolls were held in Belhar, Simri Bakhtiarpur, Nathnagar, Kishanganj, and Daraundha assembly constituencies on account of the sitting MLAs getting elected to the Lok Sabha. Four of the five seats were held by the JD(U) and one (Kishanganj) was with the Congress. However, following the by-elections, RJD’s Zafar Alam and Ramdeo Yadav won from Simri Bakhtiarpur and Belhar seats respectively.

Independent candidate Karnjeet Singh won from the Daraundha seat. AIMIM’s Qamrul Hoda won his party a maiden seat in the Bihar assembly by winning from Kishanganj. The only saving grace for the NDA came from Nathnagar where JD(U)’s Lakshmikant Mandal defeated RJD’s Rabiya Khatun by 5,131 votes. Hence, the current strength of the JD(U) in Bihar assembly is 68, while the RJD has 82 seats. Congress has 26 MLAs.

(The above story first appeared on LatestLY on Sep 25, 2020 12:31 PM IST. For more news and updates on politics, world, sports, entertainment and lifestyle, log on to our website latestly.com).