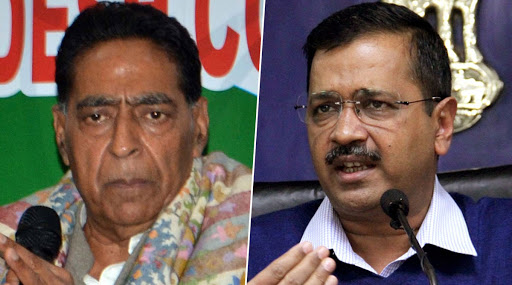 New Delhi, February 9: A day after the polls of polls predicted the return of Aam Aadmi Party in Delhi in their post-poll predictions, Delhi Congress chief Subhash Chopra quashed the possibilities of an alliance with Arvind Kejriwal's party. He also said that one should wait for the final results by the ECI.

Speaking to the reporters in the national capital on the issue of possible alliance with AAP after the results, Subhash Chopra said, as quoted by news agency ANI, "Let the results be out. Personally, I am against it. I can't even think of letting Arvind Kejriwal form govt in Delhi again. There's no question of any alliance." Delhi Assembly Election Exit Poll Results 2020: AAP to Retain Power with Decisive Majority, BJP Distant 2nd, Predicts Poll of Polls.

Delhi Congress President Subhash Chopra on being asked about any possibility of Congress-AAP alliance: Let the results be out. Personally, I am against it. I can't even think of letting Arvind Kejriwal form govt in Delhi again. There's no question of any alliance. #DelhiElections pic.twitter.com/dZFDGKDVYt

As per the polls of polls, none of the survey agency gave more than five seats to Congress in the Delhi Assembly Elections 2020, while BJP too lagged behind with 10-15 seats in most of surveys. However, BJP state chief Manoj Tiwari had quashed the post-poll predictions and claimed that BJP will form the next government in Delhi. '

Earlier on Saturday evening, the post-election surveys predicted a victory in up to 61 seats for the Arvind Kejriwal-led party -- hinting at an absolute pro-incumbency sentiment in favour of the Delhi Chief Minister. BJP which led an aggressive campaign centred around the Shaheen Bagh protests, could improve its tally to as much as 26 seats, the exit polls suggested. The final results of the polls would be declared on January 11 by the ECI.