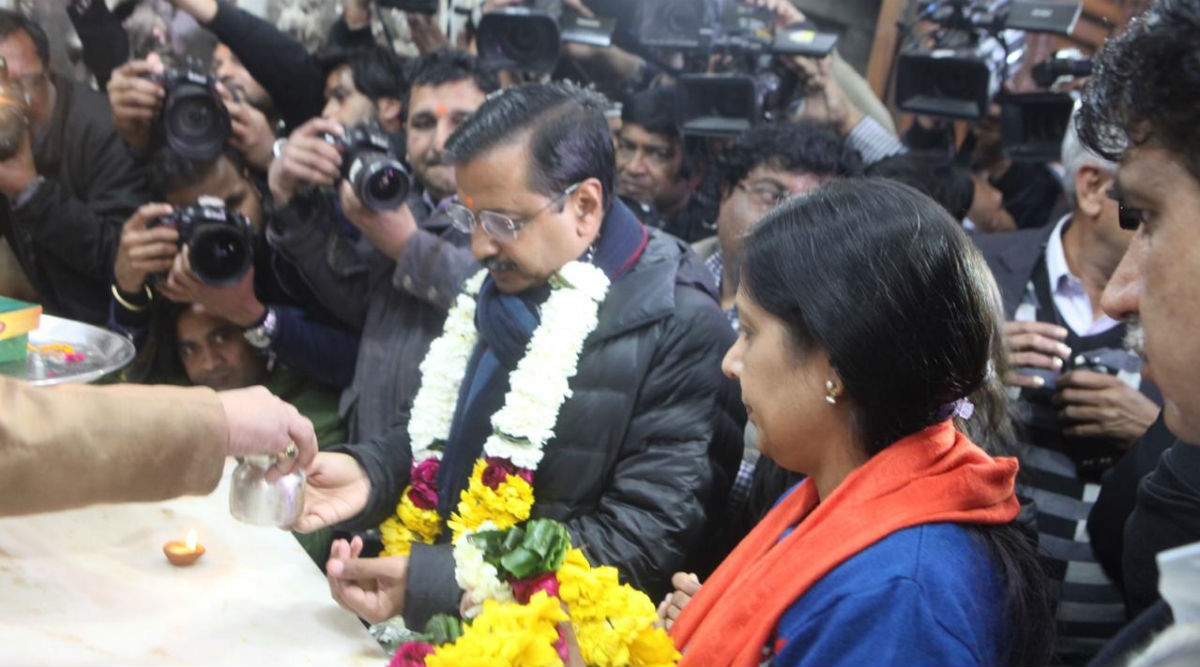 New Delhi, February 11: The Aam Aadmi Party (AAP), led by Arvind Kejriwal, is set to retain power in Delhi where counting of votes for assembly election results was held on Tuesday. The Bharatiya Janata Party (BJP) appeared to have regained some ground in the national capital, whereas the Congress failed miserably once again. According to the Election Commission, AAP candidates were leading on 58 seats, while the BJP was ahead in 12 constituencies. There have been a number of factors that contributed to AAP's expected hat-trick in Delhi and BJP's loss despite a fierce campaign ran by Prime Minister Narendra Modi and Union Home Minister Amit Shah. LatestLY lists three major reasons for Kejriwal's return to power. Delhi Assembly Elections Live Updates.

Arvind Kejriwal Vs Who?

Delhi Chief Minister Arvind Kejriwal's popularity played a vital role in AAP's anticipated victory. While the AAP had Kejriwal as Chief Ministerial candidate, the BJP initially projected Manoj Tiwari as CM face but later did not announce it. Kejriwal took advantage of this and dared the BJP to declare their CM candidate. The absence of a CM face played spoiler for the BJP which largely banked on Prime Minister Narendra Modi and Union Home Minister Amit Shah's popularity.

AAP's victory shows Kejriwal managed to convince electorates that PM Modi will not govern Delhi if the BJP is voted to power. The headless BJP, despite fielding several Ministers and MPs for campaigning, failed to counter Kejriwal's hold over Delhi voters. Fact Check: Did Aam Aadmi Party's First List Include 21 Muslim Candidates? Here's The Truth.

While the BJP and Congress started their election campaign weeks prior to the announcement of dates for polls, Kejriwal has been engaged relentlessly in highlighting AAP's works since he came to power in 2015. Pictures of Delhi government schools with well-furnished classrooms and amenities such as swimming pool surprised the country where government schools exist in unpalatable conditions.

Kejriwal successfully sold the notion that AAP is the only party that is investing in the education sector. The quality of education in Delhi also improved over the last five years under the AAP government. Subsidised water and electricity also helped AAP in bringing Delhiites in its fold. Kejriwal told voters that their free water, power and bus rides will go if the BJP is voted to power. While the BJP asserted that the existing subsidies on electricity and water will continue, but not mentioning them in their 'Delhi Sankalp Patra' gave ammo to Kejriwal.

"Manifesto of BJP proved that if you vote for them then your free electricity, free water and free bus journey will be stopped. Think and vote," Kejriwal had said and now it appears voters agreed with him.

The ongoing protest against the Citizenship Amendment Act in Delhi's Shaheen Bagh became a tricky pitch for Arvind Kejriwal who was aiming for a hat-trick. The BJP ran its campaign around the Shaheen Bagh stir and accused the AAP government of shielding "traitors". BJP's star campaigner and Uttar Pradesh Chief Minister Yogi Adityanath continued to link AAP with Pakistan despite Election Commission's notice.

While the BJP accused Kejriwal of protecting Shaheen Bagh protesters, many criticised him for not visiting and speaking for anti-CAA agitators. It was a double-edged sword for the AAP chief. Kejriwal adopted a cautious approach. Once famous of hitting the street, Kejriwal maintained distance from Shaheen Bagh and AAP leaders did not visit the site or express solidarity. Legislator Amanatullah Khan was only AAP member who visited Shaheen Bagh but only for a couple of time.

The BJP wanted Kejriwal to either oppose CAA or support the Shaheen Bagh protest. However, the AAP leader did not fall in the trap. He once vaguely opposed the CAA and that was it. Whenever asked for his stand on CAA, he diverted attention, saying there were other pressing issues related to economy and unemployment to be discussed. When the BJP targeted him on the Shaheen Bagh stir, he countered saying had the police been under his authority, roads would have been cleared. This way, he neither supported CAA nor the Shaheen Bagh protest.