How Gajendra Singh Shekhawat Has Risen From Being a Student Leader to Now Serving as Union Jal Minister; A look At The Political Career of BJP MP From Rajasthan 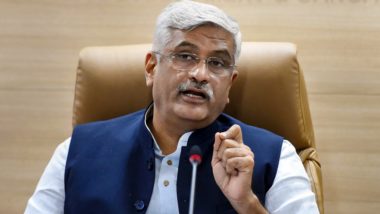 Union Jal Minister Gajendra Singh Shekhawat is a stalwart Bharatiya Janata Party (BJP) leader from Rajasthan. Gajendra Singh Shekhawat started his political career in 1992 as President of University's Student Union at Jai Narayan Vyas University. He is currently a BJP MP from Rajasthan's Jodhpur. Shekhawat's political career spans over decades. The union minister is part of the BJP's frontline offensive against the Ashok Gehlot government in the state. Shekhawat was appointed as Minister of Jal Shakti on May 31, 2019.

Shekhawat was elected as a member of parliament to the 16th Lok Sabha in 2014 from the Jodhpur constituency. He became the Minister of Jal Shakti on May 31, 2019. Gajendra Singh Sekhawat was credited with launching the Jal Jeevan mission on August 15, 2019. As part of the Mission, the government aims to provide drinking water to every rural household of the country. His ministry is also working for the revival and conservation of the wetlands in the Ganga Rivera basin as part of clean-Ganga Mission, a flagship programme of the Centre. Rajasthan Municipal Elections 2020: CM Ashok Gehlot, Union Minister Gajendra Singh Shekhawat and Lok Sabha Speaker Om Birla's Image at Stake in Upcoming Civic Polls.

Here's a Look At The Political Career of Gajendra Singh Shekhawat:

Shekhawat was elected as President of the University's Student Union at Jai Narayan Vyas University with the highest-ever percentage record of votes under the flag of Akhil Bhartiya Vidhyarthi Parishad. During the tenure, he organised the All India Student Leaders Convention, various cultural and sports events. Shekhawat was also appointed as National General Secretary of the BJP Kisan Morcha. Centre Has No Plans to Shift GFCC Headquarters out of Bihar: Union Jal Minister

The union minister was elected as a member of parliament to the 16th Lok Sabha in 2014 from jodhpur. He defeated his opponent with the highest ever winning margin of 4,10,051 votes. In 2017, Shekhawat was appointed as Union Minister of State, Ministry of Agriculture and Farmers Welfare on September 3, 2017.  In the 2019 Lok Sabha Elections, he defeated Vaibhav Gehlot, son of Rajasthan CM Ashok Gehlot, with a margin of 2.74 lakh votes.

Shekhawat also held many positions in many forums and organisations before joining politics. He was the co-convener of the Swadeshi Jagaran Manch, the economic wing of the Sangh Parivar and the General Secretary of Seema Jan Kalyan Samiti. He also played an instrumental role in setting up 40 schools and four hostels along the Indo-Pak border.

(The above story first appeared on LatestLY on Mar 09, 2021 04:46 PM IST. For more news and updates on politics, world, sports, entertainment and lifestyle, log on to our website latestly.com).