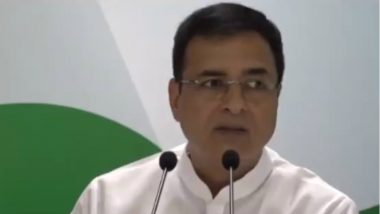 Jaipur, July 12: Senior Congress leader Randeep Surjewala on Sunday exuded confidence that the party's government in Rajasthan will complete its five-year term and said the BJP has no reason to cheer.

Surjewala reached Jaipur along with party colleague Ajay Maken late on Sunday night. The two leaders have been sent by the Congress as central observers to save the party's government in the state.

The action by the Congress leadership came in the midst of a widening rift between Chief Minister Ashok Gehlot and his deputy Sachin Pilot. Rajasthan Political Crisis: 75 Congress MLAs Attend Meeting Called by Ashok Gehlot, Action Likely Against Absentees From 'Sachin Pilot Camp'.

"There is no reason for the BJP to cheer. Congress government will complete its five-year term," Surjewala, who is also the party's spokesperson, told reporters. Surjewala and Maken will hold a meeting with Gehlot and Congress MLAs to avert a crisis in the state.

AICC general secretary Avinash Pande also reached the chief minister's residence for the meeting. Pilot, who has been camping in Delhi, skipped the meeting.

Gehlot had on Saturday alleged that the opposition BJP was trying to lure Congress MLAs to topple the state government. The BJP dismissed the claim, saying the recent developments only reflected the power struggle between Gehlot and Pilot, simmering since the Congress leadership in Delhi picked the more senior politician for the CM's post.