The Kuchaikote Vidhan Sabha constituency falls in the Kuchaikote district of Bihar. Voting in Kuchaikote for the Bihar Assembly Elections 2020 will take place on November 3. The Election Commission of India (ECI) on September 25 announced the election schedule for Bihar. 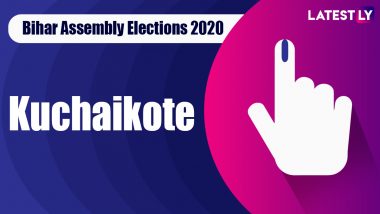 Polling for the 243-member Bihar assembly will be held in three phases. The voting for the second phase of assembly elections in Bihar will take place on November 3 in 94 constituencies. Here is the complete schedule of Phase 2 of Bihar Assembly Elections 2020. Bihar Assembly Elections 2020 Dates And Schedule: Voting in 3 Phases on October 28, November 3 and 7, Poll Results on Nov 10.

The Janata Dal United (JDU) has fielded sitting MLA Amrendra Kumar Pandey from the Kuchaikote Assembly Constituency, while Kali Prasad Pandey is contesting on the Congress ticket. The Lokjan Shakti Party (LJP) has given ticket to Ravi Pandey. In 2015, Amrendra had won the elections defeating Kali Prasad.

The Bihar Assembly elections 2020 is the first major polling exercise since the outbreak of COVID-19 in India. The BJP is contesting 243-seat assembly elections in alliance with Nitish Kumar's Janata Dal-United (JDU) as part of 50:50 seat division formula. The saffron party will contest on 121 seats, while the JDU will field its candidates on 122 seats. Notably, the JDU will accommodate seven candidates of Jitan Ram Manjhi's HAM(S) and the BJP will give 11 seats to VIP from its quota. Bihar Assembly Elections 2020 Schedule to be Announced Today; Here's A Look at 2015 Poll Results And Current Strength of JD(U), RJD, BJP and Congress.

(The above story first appeared on LatestLY on Oct 25, 2020 09:38 PM IST. For more news and updates on politics, world, sports, entertainment and lifestyle, log on to our website latestly.com).