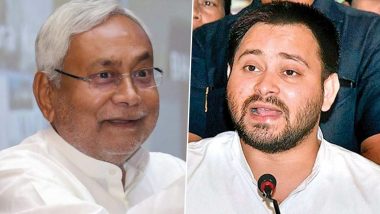 Bihar, which went to polls in three phases, witnessed a battle of alliances. The main electoral contest is between the National Democratic Alliance of the Bharatiya Janata Party (BJP), Janata Dal (United) and two regional outfits, and the Mahagathbandhan or grand alliance, which comprises of the Rashtriya Janata Dal (RJD), Congress and Left parties. The results of the Bihar assembly elections will be declared on November 10. Bihar Assembly Elections 2020 Dates And Schedule: Voting in 3 Phases on October 28, November 3 and 7, Poll Results on Nov 10.

As per the seat-sharing agreement, the BJP contested 121 seats out of the 243 Bihar constituencies while its ally JD(U) was given 122 seats. The Nitish Kumar-led party accommodated the Hindustani Awam Morcha (HAM) and the BJP a pie of its share to the Vikassheel Insaan Party (VIP). The RJD fought elections on 121 seats, while the Congress declared candidates in 70 constituencies. The grand alliance left 70 seats for Left parties. Of them, the CPI-ML got 19 seats, CPI(M) 4 and CPI 6.

(The above story first appeared on LatestLY on Nov 07, 2020 06:04 PM IST. For more news and updates on politics, world, sports, entertainment and lifestyle, log on to our website latestly.com).