Ahead of the elections, an opinion poll, conducted by IANS-C Voter, has shed lights on the political situation in Bihar. Here are five key takeaways. 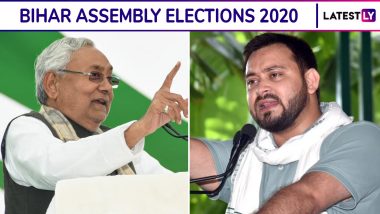 Patna, September 26: The Election Commission of India (ECI) has announced the schedule for assembly elections in Bihar. The elections for the 243 assembly seats in Bihar will take place in 3 phases between October 28 and November 7. The results of the Bihar assembly elections will be announced on November 10. The content is between the National Democratic Alliance (NDA), comprising of Chief Minister Nitish Kumar's Janata Dal (United) and Bharatiya Janata Party (BJP) among other regional players, and the Grand Alliance of Rashtriya Janata Dal (RJD), Congress and other small parties. Ahead of the elections, an opinion poll, conducted by IANS-C Voter, has shed lights on the political situation in Bihar. Here are five key takeaways from the IANS-C Voter opinion poll of Bihar. Bihar Assembly Elections 2020: HAM-S Chief Jitan Ram Manjhi, Lalu Prasad and Rabri Devi Get Z Plus Security Cover Ahead of Polls.

According to the IANS-C Voter opinion poll, the ruling JD(U)-BJP combine or the NDA will return to power in Bihar. The survey suggests that the NDA is likely to get 151 seats in the 243-member Bihar assembly, the UPA is likely to get 74 seats while others may win 18 seats.

The IANS-C Voter opinion poll suggested that Prime Minister Narendra Modi is more popular than Bihar Chief Minister Nitish Kumar in the state. When it was asked to the respondents to rate PM Modi's performance, 48.8 per cent categorised it as 'good' while 21.9 per cent dubbed it as 'average'. Only 29.2 per cent thought it to be 'poor'. To give a sense of the perspective, only 27.6 per cent of them thought Kumar's performance as Bihar Chief Minister has been 'good'. That is almost half of the approval rating of Modi. As many as 45.3 per cent think that Nitish Kumar has fared poorly as Chief Minister.

Even though Nitish Kumar remains unpopular in Bihar, a majority of respondents preferred him for the chief ministerial post over his arch-rivals such RJD leader Tejashwi Yadav. As per the IANS C-Voter Bihar opinion poll survey, 30.9 per cent of the people are still backing Nitish Kumar as the most preferable candidate to be the Chief Minister again. Nitish Kumar is followed by Rashtriya Janta Dal leader Tejasvi Yadav, who is the preferred CM candidate of 15.4 percent people, followed by BJP leader Sushil Modi (9.2 percent).

Unemployment and the status of returned migrant workers in the state are the burning issues for 25 percent of the voters in Bihar, showed the IANS-C Voter opinion poll. Health is the second most important issue that would be on the minds of the voters as 12.9 per cent of the total respondents feel that they would vote keeping in mind the status of hospitals and availability of medicines in the state.

The sample size of the survey is 25,789 and the period of the survey is September 1 to September 25. The survey covers all 243 Assembly segments and the margin of error is +/- 3 per cent at state level and +/-5 per cent at regional level. JD(U) fought the 2015 assembly elections in alliance with the RJD and the Congress and swept to power. Nitish Kumar became the Chief Minister as the leader of the alliance, but later dumped the RJD and joined hands with the BJP to form a new government. (With agency inputs)

(The above story first appeared on LatestLY on Sep 26, 2020 03:50 PM IST. For more news and updates on politics, world, sports, entertainment and lifestyle, log on to our website latestly.com).