Lost in Translation: Puducherry CM V Narayanasamy Translates Complaint Against Him Into Compliment in Presence of Rahul Gandhi (Watch Video)

Narayanasamy, who was translating people's concerns and Rahul Gandhi's response, did not let the complaint reach Rahul Gandhi. 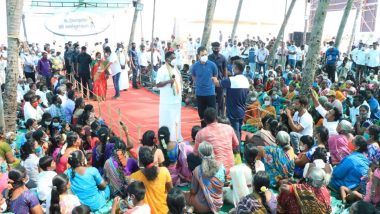 Puducherry, February 18: Puducherry Chief Minister V Narayanasamy had an embarrassing moment in presence of Congress leader Rahul Gandhi when a fisherman complained that he did not visit them when a cyclonic storm hit their coastal hamlet. Narayanasamy, who was translating people's concerns and Rahul Gandhi's response, did not let the complaint reach the former Congress chief. He mistranslated the complaint into compliment for himself. Puducherry Political Crisis: V Narayanasamy Government in Minority After 4th Congress MLA Resigns.

During the interaction with Rahul, the woman alleged that none from the government visited the hamlet in the wake of cyclone. "The sea is always rough. But no one is supporting us. Even he (Narayanasamy)… Did he visit our hamlet even once after the cyclones?" she asked. But, Narayanasamy mistranslated the woman's complaint against him into a compliment. V Narayanasamy Meets New Puducherry LG Tamilisai Soundararajan.

The Chief Minister told Rahul, "During cyclone Nivar, I visited the area and gave relief to them that she is referring", triggering a political row. It remains unclear if Narayanasamy misunderstood the woman's complaint or deliberately mistranslated her words.

Narayanasamy Translates Complaint Against Him Into Compliment:

During the interaction with fishermen at the coastal village Muthailpet, Rahul alleged that the union government is systematically dismantling all small and medium enterprises as they want them to be controlled by one or two big corporate entities. He appealed to the poor in the country to unite and organise themselves to demand their rights from the ruling BJP.

(The above story first appeared on LatestLY on Feb 18, 2021 02:28 PM IST. For more news and updates on politics, world, sports, entertainment and lifestyle, log on to our website latestly.com).