He said, three central laws promulgated through ordinances on June 5 -- The Farmers' Produce Trade and Commerce (Promotion and Facilitation) Ordinance, the Essential Commodities (Amendment) Ordinance, and the Farmers (Empowerment and Protection) Agreement on Price Assurance and Farm Services Ordinance, 2020 -- are a big jolt to farmers. 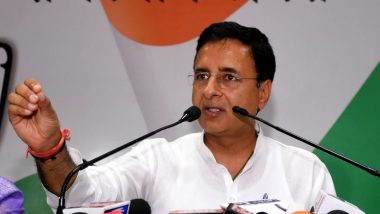 New Delhi, September 12: The Congress on Saturday slammed the Modi government over the three central laws promulgated through ordinances on June 5, saying it is acting like the "East India Company" to enslave the farmers.

He said, three central laws promulgated through ordinances on June 5 -- The Farmers' Produce Trade and Commerce (Promotion and Facilitation) Ordinance, the Essential Commodities (Amendment) Ordinance, and the Farmers (Empowerment and Protection) Agreement on Price Assurance and Farm Services Ordinance, 2020 -- are a big jolt to farmers.

These new rules are meant to squeeze the farmers, their markets and to keep them under debt of corporates, he alleged.

"It is a conspiracy to keep farmers under debt of corporates. It is clear that the Modi government in connivance with its corporate friends is acting like the East India Company," he said.

Surjewala further said that Modi came to power by promising 50 per cent more return to farmers on their investment but he is trying his best to finish the farming sector through these three ordinances.

Claiming that the real intention of the government is to implement the Shanta Kumar Committee report, Surjewala while quoting agricultural experts said, "The Modi government does not want to give a minimum support price, and thus wants to save nearly Rs one lakh crore in a year. It will directly hit the farmers".

Shanta Kumar Committee Report in 2015 had recommended that the Food Corporation of India (FCI) should hand over all procurement operations of wheat, paddy and rice to the states.

"FCI will accept only the surplus (after deducting the needs of the states under NFSA) from these state governments (not millers) to be moved to deficit states," recommended the report.

Alleging that if the Modi government dilutes the Agricultural Produce Market Committee (APMC), it will destroy the whole system of agrarian trade and the economy, Surjewala said through the ordinances, the government wants to benefit the capitalists and multinational companies. Congress Working Committee Meet: Sonia Gandhi Asks CWC to Select New President for Congress Party, Manmohan Singh Urges Her to Continue.

He further accused Prime Minister Narendra Modi of being "anti-farmer" since the beginning and said that after coming to power in 2014 the government brought in the Land Acquisition Act to end the practice of compensation to farmers.

He also alleged that in the wake of the Covid-19 pandemic the government is trying to create opportunities for its industrialist friends by keeping the interests of farmers at bay.

(The above story first appeared on LatestLY on Sep 12, 2020 08:16 PM IST. For more news and updates on politics, world, sports, entertainment and lifestyle, log on to our website latestly.com).