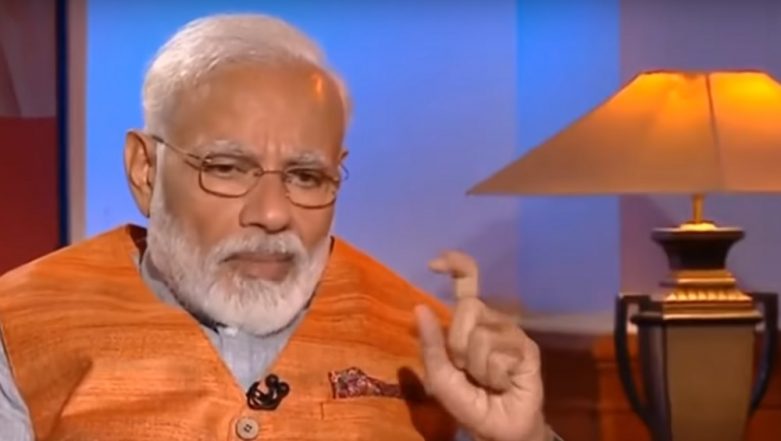 New Delhi, May 13: Prime Minister Narendra Modi's claim in an interview that he suggested the Indian Air Forces (IAF) that clouds and rain can help fighter jets evade Pakistani radar during Balakot air strikes has given the Congress party chance to ridicule the PM and his Bharatiya Janata Party (BJP). Congress leaders, including IT cell head Divya Spandana, have been taking potshots at PM Modi and BJP over the prime minister's "unbelievable" claims about clouds, radars, digital camera and email.

In the "scripted" interview by news channel News Nation, PM Narendra Modi said: "The weather was not good on the day of air strikes. There was a thought that crept in the minds of the experts that the day of (Balakot) strike should be changed. I had two issues in mind. One was secrecy... second, I said I am not someone who knows the science. I said there is so much cloud and rain. There is a benefit. I have raw wisdom, the clouds can benefit us too. We can escape the radar. Everyone was confused. Ultimately I said there are clouds...chal pade." Narendra Modi's Statement About 'Effect of Clouds on Radar Signals from Aircraft During Balakot Strike' Deleted By BJP Twitter Handles After Backlash.

"Pakistani radar doesn’t penetrate clouds. This is an important piece of tactical information that will be critical when planning future air strikes," Omar Abdullah tweeted. "Looks like the tweet got lost in the clouds. Luckily there are screen shots floating around to help," he added after BJP Twitter handle removed the tweet. Mehbooba Mufti wrote: "No secret that Balakot strikes failed to hit the intended target. Was it because  PM overruled the advice of IAF & authorised airstrikes in bad weather? Cloud cover logic is painfully embarrassing. Remind me again, why is RG derided as Pappu?"

Pakistani radar doesn’t penetrate clouds. This is an important piece of tactical information that will be critical when planning future air strikes. https://t.co/OBHwEJfGSW

Received via whatsapp. Got to admit. Sense of creativity & humour in our country is just unparalleled! pic.twitter.com/I54a3wsIvF

Sitaram Yechury said: "National security is not something to be trifled with. Such an irresponsible statement from Modi is highly damaging. Somebody like this can't remain India's PM." The cloud-radar claim was not the only one that drew criticism and derision. In the interview, PM Modi said he had a digital camera in 1987-88 and used email to send LK Advani's picture. In a series of tweets, Divya Spandana mocked PM Modi.

"The question is even if he did have an email id in 1988 when the rest of the world didn’t, who was he sending emails to? ET?" she wrote retweeting a tweet which says in 1988 email was available to few academics and scientists. She also posted a meme with caption "Narendra Modi emailing his first packet in 1988 via ARPANET on a cloudless day".

Narendra Modi emailing his first packet in 1988 via ARPANET on a cloudless day. pic.twitter.com/gUhEWHKsOn

Here’s what you’d see- question no 27. Unfortunately for Modi, it wasn’t cloudy, the radar picked this up 😋 pic.twitter.com/aRiEUgPdaB

Divya Spandana also claimed that the interview was scripted. Sharing a picture, she wrote: "Here’s what you’d see- question no 27.   Unfortunately for Modi, it wasn’t cloudy, the radar picked this up."