The organisers of the event stated that they had to cancel the event after right-wing groups’ members protested over the actor's recent remarks on mob violence. 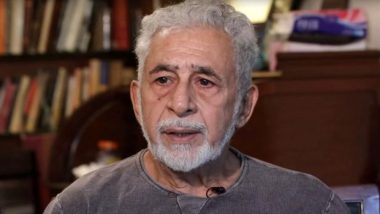 Ajmer, December 21: Hours after veteran Bollywood actor Naseeruddin Shah replied back for being criticised over his comments on rising ‘intolerance’ and alleging that the government is more concerned about cows’ life than humans, the organisers of the Ajmer Literature Festival called off an event on Friday – set to be addressed by him.

As per the information, the renowned actor was supposed to deliver a keynote address of the fifth edition of the three-day literature festival in Ajmer. The organisers of the event stated that they had to cancel the event after right-wing groups’ members protested over the actor's recent remarks on mob violence. Naseeruddin Shah Responds to Controversy Over His Comments, Asks 'How Is Expressing Concern on My Country A Crime?'

In another report, Uttar Pradesh's Navnirman Sena president Amit Jani booked Shah’s ticket to Karachi in Pakistan for August 14, 2018. Jani said, “If Naseeruddin Shah is scared in India, he should not delay in leaving for Pakistan. I have booked a ticket for him for August 14, the Pakistan Independence Day, so that India has one less traitor.” 'Naseeruddin Shah Has Taken Role of Pakistani Agent Seriously', Says UP BJP Chief Mahendranath Pandey.

Earlier on Friday, Shah in his reply to the criticism for his comments on ‘rising intolerance’, he had said, “What I said earlier was as a worried Indian. I have said this earlier as well. What did I say this time that I am being called a traitor? It is very strange."

Adding more, “I have to bear criticism. If they have the right to criticise, then I also have the same right. I am expressing concerns about the country I love, the country that is my home. How is that a crime?”

(The above story first appeared on LatestLY on Dec 21, 2018 10:58 PM IST. For more news and updates on politics, world, sports, entertainment and lifestyle, log on to our website latestly.com).