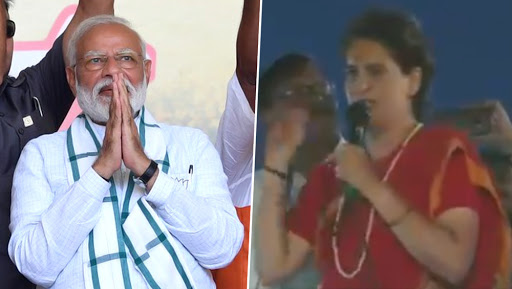 Indore, May 13: Congress general secretary Priyanka Gandhi Vadra on Monday took a swipe on Prime Minister Narendra Modi's 'radar me nahi aayenge' row and lambasted him on his 'defence expert' knowledge. She even took a jibe at his knowledge on the way BJP-led Union government gave Rafale deal contract to Anil Ambani's Reliance Defence.

#WATCH Priyanka Gandhi Vadra, Congress in Indore, Madhya Pradesh: He is such a defence expert that he himself decided who will manufacture planes, he decided those who have never made a plane in their lives will make it.....He thought, weather is cloudy, it won't come on radar. pic.twitter.com/ZnnoZd5xM8

Attacking the Premier on giving Rafale contract to Anil Ambani's firm, Gandhi said, "Itne bade raksha viseshagya hai ki unhone khud tay kar liya ki jahaz kaun banayega..jisne kabhi ek hawai jahaz zindagi me nahi banaya..wo baneyaga. Usko zameen bhi de di, usko contract bhi de diya, HAL se banwaya nahi jisne 50 saal se jahaz banaya (He (Narendra Modi) is such a defence expert that he himself decided who will manufacture planes, he decided those who have never made a plane in their lives will make it. They got the land, got the contract. HAL was not given the contract who made planes for the last 50 years)."

Gandhi was taking a jibe at PM Modi who a few days ago, in an interview had claimed that he suggested the Indian Air Forces (IAF) that clouds and rain can help fighter jets evade Pakistani radar during Balakot air strikes. Soon after the interview, opposition parties have mocked him and posted funny memes on his statements.