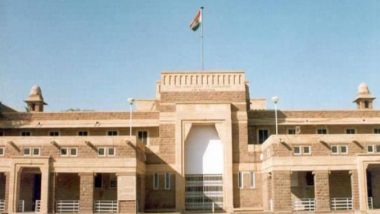 Jaipur, July 30: Rajasthan High Court on Thursday issued notice to Speaker CP Joshi and Secretary of the Legislative Assembly and six Bahujan Samaj Party (BSP) MLAs in connection with the merger of the BSP MLAs with the Indian National Congress in the state. The Court has asked them to file reply by August 11, 2020. Rajasthan Assembly Session From August 14, Governor Kalraj Mishra Approves Ashok Gehlot Govt's Proposal.

Rajasthan High Court issues notice to Speaker & Secretary of the Legislative Assembly, and 6 BSP MLAs in connection with the merger of the BSP MLAs with Congress party, in the state. The Court asks them to file reply by 11th August.

All of them had contested and won 2018 Rajasthan Assembly elections on BSP tickets but defected to Congress in September last year. They had submitted an applicated to Speaker for the merger of their group with the ruling Congress on September 16, 2020. On September 18, 2019, Speaker CP Josh allowed their plea.

The merger of the Mayawati-led Bahujan Samaj Party MLAs to the ruling Congress was a boost to Chief Minister Ashok Gehlot-led government as the grand old party’s tally surged to 107 in the House of 200.

(The above story first appeared on LatestLY on Jul 30, 2020 04:04 PM IST. For more news and updates on politics, world, sports, entertainment and lifestyle, log on to our website latestly.com).