Taking to Twitter, Pilot hoped that Dotasra would work as the State Unit Chief without any pressure or partiality and would respect all the party workers in the state. 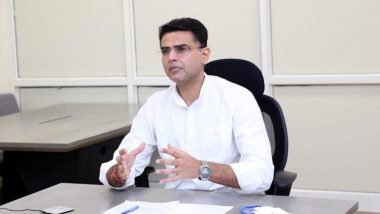 Jaipur, July 29: Congress leader Sachin Pilot on Wednesday congratulated Govind Singh Dotasra on taking charge as the Rajasthan Congress chief. Taking to Twitter, Pilot said he hopes that Dotasra would work as the State Unit Chief without any pressure or partiality and would respect all the party workers in the state. "Congratulations to Dotasara ji on taking charge as Rajasthan Congress chief. Hope that without any pressure or partiality, you'll give full respect to the workers whose hard work resulted in govt formation", Pilot said.

Dotasra on Wednesday formally took over as the new chief of the Rajasthan Congress. "I would like to thank Sonia Gandhi ji and Rahul Gandhi ji for giving the responsibility to a small worker like me who comes from a farmer's family," the newly-appointed state unit chief said. Rajasthan Governor Asks Congress Govt to Submit Fresh Proposal Seeking to Convene Assembly Session, Sets Pre-Conditions in Case of Floor Test.

Chief Minister Ashok Gehlot, while addressing the party workers, said Dotasra had played his role well as a member of the assembly and deputy chief whip when the party was in opposition. The Congress' political crisis escalated in Rajasthan earlier this month when Sachin Pilot was removed from two top posts- Rajasthan Deputy Chief Minister and the Pradesh Congress Committee (PCC) President. Two other Pilot-loyalist Ministers -- Vishvendra Singh and Ramesh Meena -- were also removed from the council of ministers.

Soon after Pilot was divested of the PCC post, State Education Minister Govind Singh Dotasara was appointed the new Pradesh Congress Committee chief. Minutes after Congress party sacked Pilot from all posts, he said that truth can be disturbed but cannot be defeated. "Truth can be disturbed, but not defeated," Pilot said in a tweet in Hindi.

Pilot also changed his profile on Twitter, deleting all references to his positions as deputy chief minister and Rajasthan Congress chief. He described himself as MLA of Tonk and a former minister of IT, Telecom & Corporate affairs, Government of India in his Twitter bio.

(The above story first appeared on LatestLY on Jul 29, 2020 05:52 PM IST. For more news and updates on politics, world, sports, entertainment and lifestyle, log on to our website latestly.com).