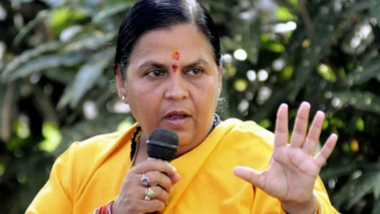 Bharti, who was one of the activists at forefront of the Ram Janmabhoomi movement initiated by BJP patriarch LK Advani in 1989, would not be attending the Ram Mandir foundation stone laying ceremony in Ayodhya tomorrow. Ram Mandir Bhumi Pujan in Ayodhya: Sri Sri Ravi Shankar Has Not Received Invitation, Says Art of Living Rubbishing Media Reports.

On social media last week, Bharti said she would be visiting the site where the temple is to be constructed after Modi and other dignitaries would leave the venue. The decision, she said, is aimed at avoiding crowded places due to COVID-19 pandemic.

"I will leave Bhopal this evening and until I reach Ayodhya tomorrow evening, I may be exposed to the infection. In this situation, I will stay away from the place where PM Modi and others will be present. I will reach there only after everyone has left the spot," she tweeted.

A total of 175 guests, including original litigant in the Ram Janmabhoomi title dispute Iqbal Ansari, have been invited at the Bhumi Pujan ceremony. Modi, who is among the five main guests along with UP CM Yogi Adityanath, Governor Anandiben Patel, saint Nritya Gopaldas and RSS chief Mohan Bhagwat, would be laying the foundation stone of the temple.

(The above story first appeared on LatestLY on Aug 04, 2020 07:53 PM IST. For more news and updates on politics, world, sports, entertainment and lifestyle, log on to our website latestly.com).