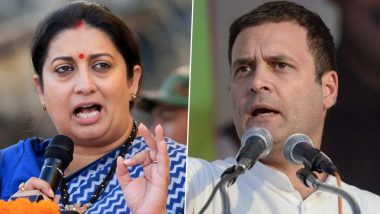 In a series of tweets after Rahul Gandhi's press conference, Irani said, "While Gyani Baba is dishing out pearls of wisdom to the Honourable Prime Minister, he may like to introspect on the following - Where did the second wave start? - Congress ruled states. Which states had a huge percentage of India's cases and deaths? - Congress ruled states."  COVID-19 Deaths 5–6 Times Higher, Coronavirus Third Wave Could Be Worse: Rahul Gandhi

She pointed out that it was the Congress-ruled states that demanded decentralisation of vaccine procurement and later did a u-turn.

"Who demanded decentralization & then did a u-turn?- Congress. Which states did the worst in terms of vaccination yesterday even as the country created a world record? - Congress ruled states. It is darkness under the lamp," she said.

National in-charge of BJP's Information and Technology department, Amit Malviya tweeted, "Before Rahul Gandhi pontificates on COVID-19 management, notwithstanding that Punjab, Rajasthan, Jharkhand, Chattisgarh and Maharashtra, all Congress ruled, have been laggards, he should let us know if he has got himself vaccinated, since Congress actively promoted vaccine hesitancy."

Earlier in the day, Rahul Gandhi released a white paper on the Centre's COVID-19 management and said, "The idea is to provide insights and information so that avoidable deaths can be prevented in the coming waves."

(The above story first appeared on LatestLY on Jun 22, 2021 05:00 PM IST. For more news and updates on politics, world, sports, entertainment and lifestyle, log on to our website latestly.com).