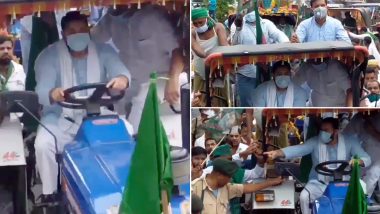 The three were booked on Friday along with 150 others and an FIR was lodged at the Kotwali police station on the basis of a complaint by the magistrate deputed to oversee the situation, the police said. Bihar Assembly Elections 2020: IANS-C Voter Survey Says 30.9% Prefer Nitish Kumar as Chief Minister.

Several farmers organisations and opposition parties including RJD had held protests against the farm bills here on Friday. RJD heir apparent Tejashwi Prasad Yadav rode a tractor to lead the protest against the passage of the three farm bills on Friday. His elder brother Tej Pratap Yadav sat atop its hood.

A named FIR has been lodged against five persons including RJD leader Tejashwi Prasad Yadav, Tej Pratap Yadav, Jan Adhikar Party (JAP) leader Pappu Yadav while 150 others have been made as unnamed accused. They have been booked for taking out protest march without having permission to do so, Kotwali police station SHO Sunil Kumar told PTI.

These leaders and unnamed persons have also been booked for taking out a protest march on Baily road where any kind of protest is prohibited, the SHO said. The FIR has been lodged under various sections of IPC and Disaster Management Act 2005.

Tejashwi Yadav, who is also the leader of opposition in Bihar Assembly, had on Friday termed the farm bills as anti farmer and aimed to privatise the agriculture sector". The rally began at the 10 Circular Road residence of RJD leader Rabri Devi, who is Tejashwi Yadav's mother, and culminated at the party's office at Veer Chand Patel Path. It did not follow the social distancing norms.

The Information and Public Relations Department Minister and JD(U) leader Neeraj Kumar meanwhile said that the people of the state want to know whether Tejashwi Yadav possesses a valid license for driving a medium goods vehicle.

He also took a swipe at Tej Pratap for violating the Motor Vehicle Act by sitting atop the hood of the tractor. The tractor that you (Tejashwi) drove is owned by one Krishna Rai jee. People of the state want to know whether you have a valid license for driving medium goods vehicle. Your brother (Tej Pratap) sat atop the hood of the tractor and committed a crime by violating section 179 of the Motor Vehicle Act .... Committing crimes is your political kusanskar (bad upbringing), Kumar said.

The Congress, Left parties, JAP and others had held bandh and protests across Bihar on Friday as part of the oppositions nationwide protest against the passage of farm bills. It was marked by a clash between the BJP and JAP here.

The clash took place in front of BJP's state headquarters when JAP workers raised anti-Narendra Modi government slogans outside its gates to protest against the farm bills.

The BJP workers came out in large numbers from the party office and started hitting with sticks the JAP activists who were in a open pick up van. The situation was brought under control after the police intervened.

Bihar BJP chief Sanjay Jaiswal condemned the incident and termed the JAP action an "act of cowardice". The opposition leaders, he said, are trying to mislead the farmers by spreading lies about the bills passed by the Parliament which were meant to bring economic prosperity to the farmers. The farmers will give a befitting reply to the opposition parties in the coming state assembly elections, Jaiswal added.