Telangana Assembly Polls to be Held by Year-End Along With 4 Other States? Election Commission to Decide Today 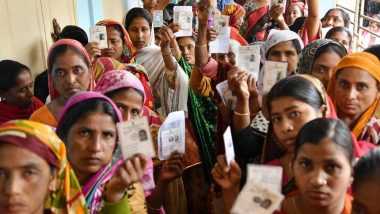 New Delhi, Sept 7: The Election Commission will convene a meeting today to decide whether the assembly polls in Telangana could be conducted by the year-end, along with four other states - Rajasthan, Madhya Pradesh, Chhattisgarh and Mizoram - which are expected to be contested in November-December.

The tenure of Telangana legislative assembly was scheduled to end in May this year. However, Chief Minister K Chandrasekhar Rao sent a shocker on Thursday by announcing the early dissolution of assembly.

EC officials while speaking to reporters sounded optimist on whether elections in Telangana could be clubbed with the four other poll-bound states.

Infrastructure is not a concern for the Commission, said an official, adding that the present stock of voter-verifiable paper audit trail (VVPAT)-equipped electronic voting machines (EVMS), along with security personnel would be suffice to simultaneously conduct elections in Telangana.

The official, however, marked concern on the updated electoral roll in the state. Since all states were asked to complete voter registration and submit the final roll by January 2019, the State Election Commission would have to expedite the process in Telangana if the polls are to be conducted by the year-end.

As per the norms, assembly elections must be held within six months of the dissolution of the assembly. If the polls could not be conducted by December, the Commission may face obstacles in the next few months as the model code of conduct would come into force ahead of the Lok Sabha elections.

Gap between two scheduled polls also needs to be taken into account, added another official, claiming that the results of one set of elections should not influence the other.

(The above story first appeared on LatestLY on Sep 07, 2018 10:10 AM IST. For more news and updates on politics, world, sports, entertainment and lifestyle, log on to our website latestly.com).