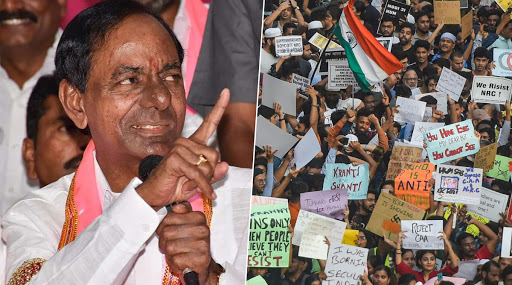 Hyderabad, January 25: Following the footsteps of Rajasthan, Punjab and Kerala, Telangana Chief Minister K Chandrasekhar Rao on Saturday informed that his state Cabinet is mulling to pass a resolution against Citizenship Amendment Act in the Assembly. He said that his party had openly opposed the act and stand by the viewpoint that the bill should not have been passed in parliament.

Speaking to the reporters, KCR said, as quoted by news agency ANI, "We will discuss Citizenship Amendment Act in coming assembly sessions. We openly opposed the Act and in future we may bring a resolution against it." Rajasthan Govt's Anti-CAA Resolution Draws Flak From Centre, Union Minister Gajendra Shekhawat Calls It 'Murder of Democracy'.

Telangana Chief Minister K Chandrasekhar Rao: We will discuss #CitizenshipAmendmentAct in coming assembly sessions. We openly opposed the Act and in future we may bring a resolution against it. pic.twitter.com/jgd1TvWsSZ

Earlier on Saturday, Rajasthan assembly on Saturday passed a resolution against the Citizenship Amendment Act (CAA) and became the third state after Kerala and Punjab to pass an assembly resolution seeking repeal of CAA. Rajasthan Deputy CM Sachin Pilot had said that the Centre should listen to people protesting against the law and asserted that democracy will weaken if there is no dialogue.

However, Union Cabinet Minister in Ministry of Jal Shakti Gajendra S Shekhawat condemned the move by Gehlot government and called act as "Murdering the Democracy" and referred this to a conspiracy to divide the country. Meanwhile, Chhattisgarh CM Bhupesh Baghel and Madhya Pradesh CM Kamal Nath are too discussing to pass resolution seeking repeal of CAA in their respective state assemblies.