The Tikari Vidhan Sabha seat will go to polls in the first phase of the Bihar assembly elections 2020. A total of 25 candidates are in the fray. 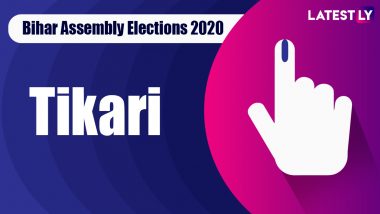 Patna, October 18: The Tikari Vidhan Sabha seat will go to polls in the first phase of the Bihar assembly elections 2020. A total of 25 candidates are in the fray from Tikari assembly constituency. However, the main electoral contest is between the Congress and Jitan Ram Manjhi's Hindustani Awam Morcha (Secular). According to the schedule announced for the Bihar assembly elections, polling for the Tikari assembly seat will be held on October 28. Gaya Town Vidhan Sabha Seat in Bihar Assembly Elections 2020: Candidates, MLA, Schedule And Result Date.

The current MLA from Tikari is Janata Dal (United) leader Abhay Kumar Sinha.  Under the seat-sharing agreement between the JD(U), Bharatiya Janata Party (BJP) and HAM-S, the Tikari seat went to Jitan Ram Manjhi's party. Similarly, as per the sear-sharing deal between the Rashtriya Janata Dal (RJD), Congress and Left parties, the grand old party will contest from Tikari. The HAM-S fielded Anil Kumar, while Sumant Kumar is Congress's candidate. Bihar Assembly Elections 2020 Dates And Schedule: Voting in 3 Phases on October 28, November 3 and 7, Poll Results on Nov 10.

For the Tikari Vidhan Sabha seat, the last date of filing nomination papers was October 8. Nominations were scrutinised on October 9. The last date for withdrawal was October 12. According to ECI's schedule, Bihar will go to polls in three phases: October 28, November 3 and November 7 for its 243 assembly seats. The results will be declared on November 10.

The JDU-BJP alliance is likely to win the Bihar assembly elections by bagging 160 of the 243 seats, suggested an opinion poll conducted by the Times Now. The IANS-C Voter opinion poll also predicted that the JDU-BJP combine could win 151 seats, whereas the RJD-Congress-Left may bag 74 seats.

(The above story first appeared on LatestLY on Oct 18, 2020 12:10 PM IST. For more news and updates on politics, world, sports, entertainment and lifestyle, log on to our website latestly.com).