The Gaya Town Vidhan Sabha seat in Bihar will go to polls in the first phase of the state assembly elections 2020. 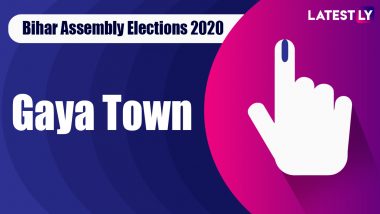 Patna, October 18: The Gaya Town Vidhan Sabha seat in Bihar will go to polls in the first phase of the state assembly elections 2020. In Gaya Town assembly constituency, the electoral fight is between the Bharatiya Janata Party (BJP) and Congress. Polling for the Gaya Town seat will be held on October 28, according to the schedule for the Bihar assembly elections 2020, announced by the Election Commission of India. Bodh Gaya Vidhan Sabha Seat in Bihar Assembly Elections 2020: Candidates, MLA, Schedule And Result Date.

In Gaya Town constituency, the BJP has renominated its incumbent MLA Prem Kumar. Akhauri Onkar Nath is the candidate of the Congress party. Prem Kumar will also receive support from the Janata Dal (United) and two other regional parties under the seat-sharing agreement between them. Similarly, Congress's Akhauri Onkar Nath is backed by the Rashtriya Janata Dal (RJD) and Left parties. While the BJP is contesting 121 seats, the Congress is fighting on 70 seats. Bihar Assembly Elections 2020 Dates And Schedule: Voting in 3 Phases on October 28, November 3 and 7, Poll Results on Nov 10.

For the Gaya Town seat, the last date of filing nomination papers was October 8. Nominations were scrutinised on October 9. The last date for withdrawal was October 12. The elections for 243 assembly seats in Bihar will be held in three phases - for 71 seats on October 28, for 94 seats on November 3, and remaining 78 on November 7. The results will be announced on November 10.

According to the IANS-C Voter opinion poll, the ruling JD(U)-BJP combine or the NDA is likely to return to power in Bihar. The JDU-BJP alliance has also been projected as the winner by the Times Now survey.

(The above story first appeared on LatestLY on Oct 18, 2020 11:59 AM IST. For more news and updates on politics, world, sports, entertainment and lifestyle, log on to our website latestly.com).