Uddhav Thackeray Lashes Out at BJP For Questioning His Hindutva and Over Free COVID-19 Vaccine Promise in Bihar; Top Quotes From Shiv Sena Chief's Dussehra Speech

Speaking at Shiv Sena's Dussehra rally, Uddhav Thackeray hit out at the BJP for questioning his Hindutva credentials and promise of free COVID-19 vaccine in Bihar. 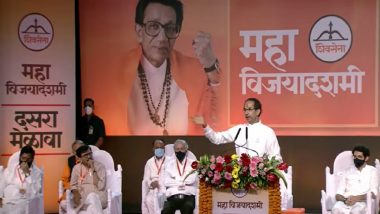 Earlier this month, Maharashtra Governor Bhagat Singh Koshiyari had taunted Uddhav for not allowing reopening of religious places, asking if he had turned "secular" leaving "Hindutva". "You have been a strong votary of Hindutva… Have you turned ‘secular' yourself, the term which you hated?" Koshyari had asked Thackeray. Thackeray's son was also dragged in the case related to Sushant Singh Rajput. The Shiv Sena chief on Sunday responded to all the allegations. Temple Re-Opening in Maharashtra: Sharad Pawar Backs CM Uddhav Thackeray in War of Words Against Governor Bhagat Singh Koshyari.

Uddhav Thackeray said: "We are being asked about Hindutva, that why are we not re-opening temples in the state. They say my Hindutva is different from that of Balasaheb Thackeray. Your Hindutva is about clanging bells and utensils, our Hindutva is not like that." Without naming BJP, he added: "You are talking about our Hindutva. So in Maharashtra, you are putting a ban on beef, but in Goa, you are okay with beef. Is this your Hindutva?"

Uddhav Thackeray also slammed the BJP over its poll promise of free COVID-19 vaccine in Bihar. He said: "You promise free Covid-19 vaccine in Bihar, then are people of other states from Bangladesh or Kazakhstan. Those speaking like that should be ashamed of themselves. You are at the Centre."

Thackeray made a veiled attack on actor Kangana Ranaut for "maligning" image of Maharashtra and Mumbai Police, saying some people come to Mumbai for bread and butter and abuse the city by calling it Pakistan occupied Kashmir (PoK). He also defended his son Aaditya. He said: "Those crying for justice for Bihar's son are indulging in character assassination of Maharashtra's son. You even maligned my son Aaditya. So whatever you said, keep it yourself. We are clean."

(The above story first appeared on LatestLY on Oct 25, 2020 10:04 PM IST. For more news and updates on politics, world, sports, entertainment and lifestyle, log on to our website latestly.com).