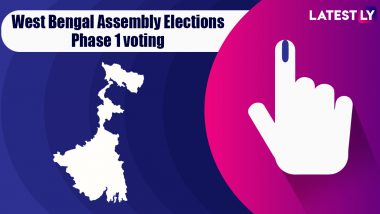 Kolkata, March 27: The voting for the Phase 1 of West Bengal Assembly Elections 2021 was held on Saturday between 7 am and 6 pm. In the first phase, the Vidhan Sabha polls were held for 30 assembly constituencies across five districts in the state. As per the Election Commission of India, the overall voter turnout for stood at 79.79  per cent till 6 pm. West Bengal Assembly Elections 2021 Dates: Polling in 8 Phases Between March 27 and April 29, Results on May 2; Check Full Schedule Here.

Amid the Phase 1 polling of the West Bengal Assembly Elections, Mamata Banerjee-led TMC on alleged 'discrepancy' in voting percentage and malfunctioning of EVMs. As reported by news agency ANI, Trinamool Congress Leader Derek O'Brien has written a letter to the Election Commission in this regard, and a party delegation met the poll panel in the afternoon. The TMC is leaving no stone unturned to retain its power in the state for forth consecutive term.

(The above story first appeared on LatestLY on Mar 27, 2021 06:55 PM IST. For more news and updates on politics, world, sports, entertainment and lifestyle, log on to our website latestly.com).