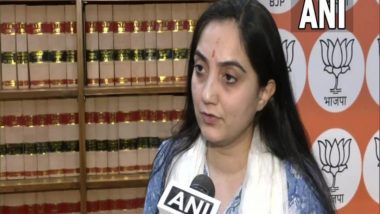 JIH president Syed Sadatullah Husaini said if apology can replace the punishment, then there is no need of courts and prisons in the country. Prophet Muhammad Row: Kolkata Police Issues Lookout Notice Against Nupur Sharma

The JIH also demanded action against "the politicians, TV channels and media houses that are fanning hatred in the country".

The remarks came at a media briefing held jointly by Husaini and JIH vice-president Mohammad Salim Engineer on Saturday here.

However, the apex court in an oral observation on Friday suggested that suspended BJP spokesperson Sharma should apologise to the nation.

The JIH leaders said that the Udaipur murder and a series of mob lynching incidents in different parts of the country -- including beating to death of an elderly Hindu on the basis of a mistaken identity in Ratlam in Madhya Pradesh recently -- were interlinked and politicians and media involved in spreading hate were responsible for it.

"There should be no double standard in taking action against those involved in promoting hate," Husaini said on the arrest of Alt News co-founder Mohammed Zubair and allowing former BJP leader Nupur Sharma move freely. He said that there should be no two sets of laws in dealing with accused based on their religious identity.

Salim said that it was highly disappointing that Nupur had not been arrested even after a month of her remarks on a TV channel. This, he said, has spoiled the image of India abroad.

(The above story first appeared on LatestLY on Jul 02, 2022 10:58 PM IST. For more news and updates on politics, world, sports, entertainment and lifestyle, log on to our website latestly.com).