The focus of 2021 for Ricky Altizer is on Tulsa. Ricky Altizer has grown his client-base substantially over the last three years, including taking one of his businesses to international status. 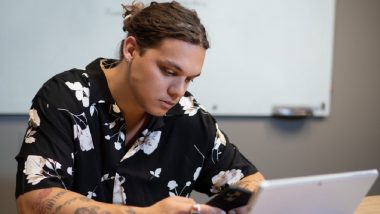 The focus of 2021 for Ricky Altizer is on Tulsa. Ricky Altizer has grown his client-base substantially over the last three years, including taking one of his businesses to international status.

As his business continues to grow, so does the number of companies that Ricky Altizer has helped along the way. Ricky has spent the last few years growing as an entrepreneur and business leader, living in San Diego, California.  But he’s recently moved back to Tulsa, Oklahoma for a season, to help his foundational community as one of his main goals for this year.

Coming from humble beginnings has motivated Ricky all through his life. Starting from a young age, he learned the values of hard work from his family, who pushed him to strive for excellence in everything he did.

“Seeing what my grandfather was able to do with his own business inspired me to want to create the same independence for myself.” says Ricky.

Having worked in the corporate sales setting for nearly 5 years in his early 20’s, Ricky quickly understood the concept of trading time for money - which he valued, but didn’t like. “It was key in my growth but just wasn’t for me”

“I learned a lot of valuable lessons working for a big corporation as my first ‘adult job’, but I hated having to show up to a certain 4 walls to make money. I just knew deep down there was a better, more efficient way to impact people and make money than what I was doing. I wanted more and knew that in order to achieve that, I needed to provide more value & elevate my way of thinking and operating.”

It’s easy to see from just one conversation, how Ricky has managed to achieve prosperity helping businesses become successful, as he is full of leadership and sound advice.

One of his client’s in Tampa, Florida states, “After 8-9 months of working with Ricky and his team, we’ve hit numbers we thought were our 3 year goals. As a company we were only generating about 60k in monthly revenue and after teaming up with Ricky we hit our best month yet at 700k in revenue! He’s definitely someone you want to work with and will tell it like it is.

When asked about his marketing agency, Deza.io,  Ricky states, “Anybody can run digital ads & throw money at the internet. At Deza.io, we’re not just a marketing agency — We’re a growth agency. We set ourselves apart by listening to the symptoms of a business, and from there we custom tailor realistic solutions to help fix those root causes.. of any size company.” We asked Ricky to share 3 tips that could benefit any business and these were his answers:

Ricky has managed to launch his third company before the age of 30, and it seems momentum is on his side. When asked about his big goal for 2021 he simply put: “We’re here to help people. If I can help someone spend more time with their family, by helping their financial situation grow, it’s my duty to show up for that person. I’m in the people business and I love what I do.”

“Sure we can grow your revenue by adjusting your sales process, coaching your sales people, writing scripts, creating a website, using marketing tricks & all the other things people think they need — and maybe they do. But at the core of all those, are people… so that’s where we start”

Although Ricky has clients all over the globe, he notes that he’s excited to play a part in the growth that is happening in Tulsa, Oklahoma.

“I used to try so hard to escape Tulsa because I grew up there, and wanted to experience more.. but as I get older I see the beauty in this community and in the people here. So I’ve committed to a ‘season’ in Tulsa to give back, and help the local business grow in the Tulsa and surrounding areas.”

In Ricky’s free time, he’s usually eating tacos or spending time with his friends and family.

His last advice is to never stop learning and evolving. Ricky expresses that in an ever-changing marketplace, we must continue to learn and adapt.. in business and as individuals.  The team he’s assembled seems to be obsessed with continual growth. And it’s evident not only in their own lives, but in their clients’ success as well.

People are following Ricky Altizer to learn more about him and his concepts by reaching out on his Instagram handle. One thing is for sure, however the space changes, it is certain that Ricky Altizer will be there, leading the charge.