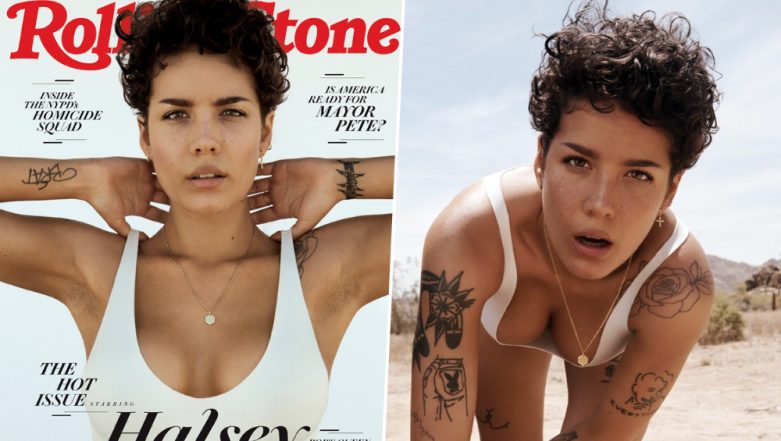 Halsey is the face for the July edition of the Rolling Stone magazine. The Without You singer is seen in a white tank top with her hands behind her neck. The picture shows off her armpit hair and people are loving the cover. Twitter and Instagram are celebrating over this step towards normalisation of body hair on women. While the majority is out celebrating over Halsey's move, there were others who had some disgusting things to say. Singer Halsey Recalls How She Considered Having Sex For Money As A Homeless Teenager.

On June 24, Rolling stone magazine posted a video on their Instagram page announcing that Halsey will be the face for their July edition. The video starts with the cover of the July edition where Halsey strikes a pose with her armpit hair on show.

Some Pictures of Halsey From Next Month's Rolling Stone Magazine:

Many people caught onto that and praised Halsey to keep her hair and show others that it’s okay for women to grow body hair. Zara Larsson also tweeted about the issue saying, “I loooove the fact that they didn't edit the armpits like most magazines would do. Women are not little babies who don't have body hair. Stunning cover 👌” Dermaplaning: Will Shaving Facial Hair Make It Thicker? Here’s What Women Need to Know.

I loooove the fact that they didn't edit the armpits like most magazines would do. Women are not little babies who don't have body hair. Stunning cover 👌 https://t.co/POHNCnIK9W

Though there were a few criticising and calling her nasty for not shaving, the majority praised Halsey and she got support from a lot of celebrities. Demi Lovato, who is also a close friend of Halsey, also commented on the Instagram post expressing how much she loved this idea. Her comment read, “There so much yes about this picture idk where to start”. Halsey’s latest single Nightmare is all about insecurities with her body. It’s nice to see her this confident!