From gloomy Wednesday to hopeful Friday and finally cheerful Saturday, Vidya's one too many pictures perfectly describe all the emotions that we go through in an entire week 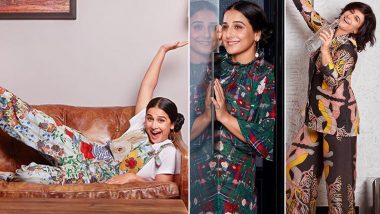 Aren't we all excited for the weekend? Those two days of pure bliss. The emotion that probably keeps you motivated for the entire week, a weekend is not merely two days of no work but it's an emotion that resonates with all of us. So while we were given the assignment to cover Vidya Balan's new photoshoot, we decided to give an interesting spin to it. One look at her happy pictures and they strike you as different expressions - the ones that you have for an entire week. Fashion Face-Off: Vidya Balan or Regina Cassandra in the Little Things Studio Saree? Whose Printed Silk Saree Was a Hoot?

From gloomy Wednesday to hopeful Friday and finally cheerful Saturday, Vidya's one too many pictures perfectly describe all the emotions that we go through in an entire week. Was that her logic behind this at-home photoshoot? We don't know but we were certainly amazed and stunned to see this chirpy side of hers. These pictures probably show an un-filtered side of Vidya. On days when she isn't reading any scripts or shooting for her multiple projects one after another, Vidya is unleashing this cutesy side of hers or probably posing for some sultry pictures that aren't everyone's cup of tea. Vidya Balan's Style File for Shakuntala Devi's E Promotion Was All About Simplicity and Being Vocal for Local (View Pics).

Go ahead and have a look at Vidya's happy and sensuous pictures from her new Filmfare photoshoot and wonder if that's what waiting for a weekend looks like.

What's the ETA for Friday?

It's Friday, FINALLY! Looking Forward to the Weekend

Time for Some Business! It's Monday Once Again

Vidya was last seen in Shakuntala Devi, a biopic on a mathematician that released online on Amazon Prime. The Parineeta actress nailed her character with all the sincerity and she was a delight overall. She'll be next seen in Sherni, a movie on a female forest officer and there were reports if she's developing a series on Indi

(The above story first appeared on LatestLY on Sep 12, 2020 04:45 PM IST. For more news and updates on politics, world, sports, entertainment and lifestyle, log on to our website latestly.com).