Guy Fawkes Night 2020 Date And Significance: Know All About Gunpowder Plot to Blow Up UK Parliament, History Behind Day's Observance

Guy Fawkes Day, also called Bonfire Night is a British observance commemorating the failure of the Gunpowder Plot of 1605. Celebrated on Nov 5, people light bonfires and enjoy fireworks on the observance. A dummy called the 'Guy' is made that represents a man who was part of the plot, called Guy Fawkes. 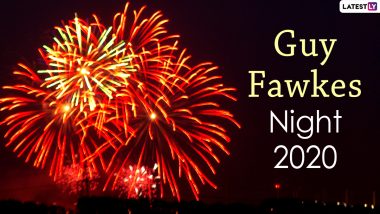 Guy Fawkes Day, also called Bonfire Night is a British observance commemorating the failure of the Gunpowder Plot of 1605. Celebrated on November 5, people light bonfires and enjoy fireworks on the observance. Some people organise fireworks parties in their back gardens, while towns and villages organise displays in public parks. They eat candy apple or toffee apple on this day. It is the anniversary of an attempt to blow up the Houses of Parliament called the Gunpowder Plot. Firewords represent the explosives that were never used by the plotters. A dummy man is kept on the top of the bonfire to remember the event. The dummy is called the 'Guy' that represents a man who was part of the plot, called Guy Fawkes. Ahead of Guy Fawkes 2020, we bring to you significance, history and celebrations associated with the observance. History, Significance of the Day Popularly Called as Bonfire Night in the UK.

What was the Gunpowder Plot?

Guy (Guido) Fawkes was part of the Gunpowder plot in 1605. He wanted to blow up King James I and his government due to their different views in religion. England was a Protestant country and the plotters were Catholic, but the attackers wanted England to be Catholic again, which they thought they could by killing King James I and his ministers. So, Fawkes and his group put 36 barrels of gunpowder in cellars underneath the Houses of Parliament in London as part of a massive explosion.

But, a member of Fawkes' group sent a letter to his friend who worked in Parliament, warning him to stay away on November 5. The King's supporters got the letter and thus the plan couldn't be executed. Guards broke into the cellars where the gunpowder plotters were waiting, arrested and executed them. Mischief Night 2020 Date And Significance: Know The History And Stories of the Observance When Teenagers Play Pranks And Engage in Vandalism.

Children carry straw effigies of 'Guy' throuhght the streets on the days leading upto the observance and ask passersby for "a penny for the guy". They recite rhymes from the 18th century, which goes, "Remember, remember, the fifth of November, Gunpowder treason and plot, We see no reason, Why Gunpowder treason should ever be forgot."

Guards perform an annual search of the Parliament building to check for potential offenders; it is more of a ceremonial process than a serious one. Lewes, in southeastern England, is the site of a celebration of Guy Fawkes Day, involving six bonfire societies whose members are grounded in family history since generations.

(The above story first appeared on LatestLY on Nov 04, 2020 08:36 PM IST. For more news and updates on politics, world, sports, entertainment and lifestyle, log on to our website latestly.com).