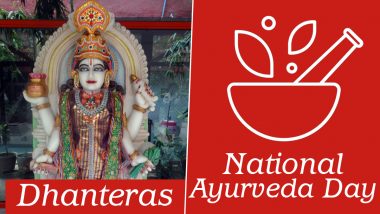 Did you know about the connection between National Ayurveda Day and Dhanvantari Jayanti aka Dhanteras? Yes, it is not a coincidence that National Ayurveda Day is celebrated on Dhanatrayodashi! There is a reason behind this. The celebration of Ayurveda Day began in the year 2016 and on 28 October 2018, it was celebrated on the occasion of Dhanteras. Dhanteras is celebrated in memory of Dhanvantari, the father of Ayurveda and to observe the festival, some people buy new utensils and offer them to Lord Dhanvantari. Dhanvantari, the son of King Dhanva, the king of Kashi made many are said to have known for news discoveries biggest experiments, mainly known for a gold urn of Amrit(nectar of life).

Why Is National Ayurveda Day on Dhanteras?

Who is Lord Dhanwantari?

Lord Dhanvantari (Dhanvantari) is called the form of Lord Vishnu who has four arms. There are conch and chakra in both the above arms. While in one of the two other arms, there is water and medicine and in the other, nectar urns are taken. Their favourite metal is considered brass. That is why there is a tradition of buying brass utensils for Dhanteras. He is called the God of Vaidya Arogya who treats Ayurveda. It was he who discovered Amritamay medicines.

(The above story first appeared on LatestLY on Nov 12, 2020 02:29 PM IST. For more news and updates on politics, world, sports, entertainment and lifestyle, log on to our website latestly.com).