Parsi New Year 2020: Know The Difference Between Pateti And Nowruz, Send Traditional Wishes and Greetings and Learn More About the Festival 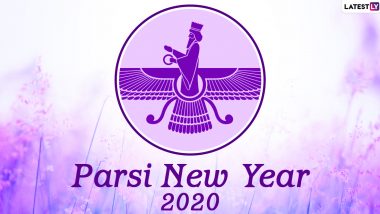 Parsi New Year will be celebrated on August 16 this year. The observance also known as Navroz is one of the main festivals of the Parsi community. It is also spelt as Nowruz or Nawroz. The celebration that marks the beginning of the Parsi calendar is also known as Jamshed-i-Nouroz. The name comes after the Persian King, Jamshed who introduced the Parsi calendar. Ahead of Navroze 2020, we bring to you detailed information about the festival including its significance and celebrations. People also ask the difference between Nowruz and Pateti and how to wish on Parsi New Year, so we bring to you detailed information about the festivity.

Navroze is the day of the vernal equinox, the time when the sun crosses the celestial equator. The first day of the first month of the Iranian calendar occurs March 21. Hence, Parsis and Zoroastrians living in Iran celebrate the day in March. As Indians follow the Shahenshahi calendar which does not count leap years, India and Pakistan observe the day 200 days later, that often falls in August The Parsi New Year traditions date back to 3000 years ago. As per folk tales, prophet Zoroaster initiated this festival after Persian king Jamshed who started the calendar. Parsi New Year is said to be an annual renewal of all thing in the universe. People send Nowruz traditional wishes and greetings to their loved ones on the festival.

A day prior to Nowruz, people observe Pateti when they repent for all their wrong deeds and believe in starting a new year clean of their sins. We wish you all a Happy Parsi New Year.

What is Navroze or Parsi New Year?

Parsi New Year is the beginning of the Parsi calendar. They visit the fire temple and pray for well-being. Parsis also make charitable donations on the occasion and meet their friends and family. The day is for celebrations, and is observed with grand festivities.

How to Wish Parsi New Year?

You can wish a person on Nowruz by saying 'Happy Parsi New Year' or 'Happy Navroze'. However, do not wish anyone on Pateti as it is not a celebration but a day to repent for the wrongdoings.

It is believed that there are around 60,000 Parsis in India. Parsis follow Zoroastrianism which was founded by Zarathustra, a spiritual leader. We wish you all a Happy Navroze in advance!

(The above story first appeared on LatestLY on Aug 13, 2020 05:04 PM IST. For more news and updates on politics, world, sports, entertainment and lifestyle, log on to our website latestly.com).