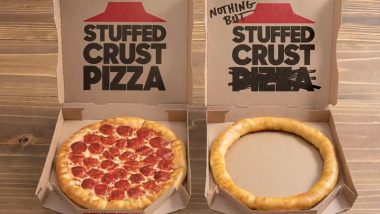 In an absolutely baseless move, quiet literally, Pizza Hut introduced a new offering which offers no pizza but just a crust. Called the Nothing But Stuffed Crust, it is their New Year innovation and if you are among the crust-lovers then this is just for you. On its 25th anniversary they introduced a "Nothing But Stuffed Crust" which is just a ring of iconic cheese-filled dough, with nothing in the middle. Vegetarian Chicken Pizza is Here! Domino's Launches India's First 'The Unthinkable' Plant-Based Protein Meat Pizza.

To promote it the pizza-chain also has an interesting offer. For the first 50 customers who make a $10 purchase they will get this crusty offering for free. During the months of the pandemic, there has been a surge in demand for pizzas all across the world including India. Talking about it George Felix, Chief Marketing Officer at Pizza Hut has said, "Over the years, we've had fans ask us if they could order just the stuffed crust by itself because it's that good." They even said that many have tried to recreate it but there would be only one "original stuffed crust pizza." Before this Papa John also launched its stuffed crust last year. Never Too Much Cheese! French Chef Makes Pizza With 254 Cheese Toppings to Make Guinness Record of 'Most Varieties of Cheese on Pizza'.

You didn’t think you could OutCrust The Hut, did you? Introducing #NothingButStuffedCrust. Limited availability while supplies last! pic.twitter.com/whUqeDDs0q

It is currently available in Los Angeles and Dallas and it is a limited period offer. The Stuffed Crust ring will be available only for a few days in the US. So if you are a total crushing over the crust person, then you must take note of this offer.

(The above story first appeared on LatestLY on Jan 06, 2021 07:31 PM IST. For more news and updates on politics, world, sports, entertainment and lifestyle, log on to our website latestly.com).