Omicron: Here is All You Need To Know About New COVID-19 Variant B.1.1.529 Detected in South Africa

Senior scientists described B.1.1.529 as the most deadly variant that has been discovered since the start of the pandemic. It has a total of 32 mutations in the spike protein, that is about double the number associated with the Delta variant 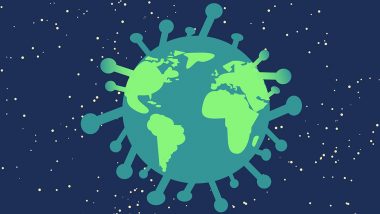 New Delhi, November 27: The World Health Organisation has named the new COVID-19 strain, that was first detected in South Africa, as 'Omicron.' The WHO has also declared the new coronavirus variant B.1.1.529 as a 'Variant of Concern.' This variant has a large number of mutations and the cases of this strain appears to be increasing all South African provinces. Several countries have announced new travel guidelines amid the scare of Omicron variant of coronavirus.

India has also added several countries to the lost from where the passengers would need to follow additional measures on arrival into the country. India will screen and test travellers from certain countries including  South Africa, Brazil, Bangladesh Botswana, China, Mauritius, New Zealand, Zimbabwe, Singapore, Israel, Hong Kong, UK and other European countries.  New COVID-19 Variant: WHO Names New Coronavirus Strain from South Africa as Omicron, Calls It 'Variant of Concern.'

The discovery of a new COVID-19 variant called B.1.1.529 has left the scientists around the world worried and they are working to understand potential implications of this new variant. Cases have been identified in South Africa, Hong Kong, Israel and Botswana. India to Screen, Test Travellers from Several Countries Including UK Amid New COVID-19 Variant 'Omicron.'

Scientists say that the new variant has relatively high number of mutations in it’s spike protein, which is a cause of concern because they could help in the virus’ entry into cells in the body and make it more transmissible.

The new deadly variant was first found in South Africa and the country has confirmed about 100 cases as B.1.1.529 but the variant has also been found in Botswana and Hong Kong. Hong Kong recorded two infections and it is believed that traveller from South Africa was found to have infected the person in the room next to him. Israel also confirmed that they had detected the first case of the variant, in a person who had returned from Malawi.

Senior scientists described Omicron variant as the most deadly variant that has been discovered since the start of the pandemic. It has a total of 32 mutations in the spike protein, that is about double the number associated with the Delta variant. Mutations in the spike protein can affect the virus’s ability to infect cells and spread, but also make it harder for immune cells to attack the pathogen.

The Delta variant was first detected in late 2020 and has since spread around the world, causing an increase in case rates and deaths. India on Thursday called for rigorous screening and testing of passengers coming from South Africa, Botswana and Hong Kong. The Health ministry said that this variant could have serious implications on public health in view of recently relaxed visa restrictions and opening of international travel.

The World Health Organisation(WHO) while underlining the importance of getting fully vaccinated called for caution in initial stages in dealing with this variant. It said that more research is needed to understand the behaviour of B.1.1.529.

(The above story first appeared on LatestLY on Nov 27, 2021 09:53 AM IST. For more news and updates on politics, world, sports, entertainment and lifestyle, log on to our website latestly.com).