Man’s Stomach Automatically Creates Alcohol Due to a Bizarre Health Condition! What Is Auto Brewery Syndrome? 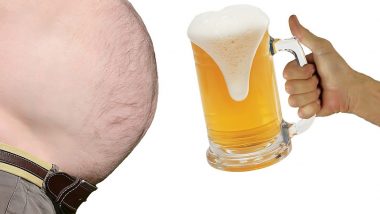 A beer belly is something we all dread. But a 46-year-old American man had a different kind of beer belly. It was, in fact, a medical problem where he was creating alcohol in his body! This happened after a fungal growth created a high level of yeast inside his gut. The man’s rare condition was discovered after he was pulled over by cops while driving for consuming alcohol. It started to unveil after traces of alcohol were found in his body despite the man confessing that he never drinks. The hospital found a whooping amount of 200mg/decilitre (dL) of alcohol in the man’s blood, which is equivalent to 10 bottles of liquor. The results were shocking to the man as well as the researchers. The man was teetotal but had the blood-alcohol level of an alcoholic! International Beer Day 2019: How to Avoid Beer Belly and Weight Gain While Making the Best of Happy Hours.

In 2015, a school teacher in New York faced the same problem when she was pulled over and charged for drinking and driving but had not had any drink. The condition was later diagnosed as "Auto Brewery Syndrome" in a study conducted by the British Medical Journal. Tired of Your Belly Fat? Here are 6 Scientific Ways to Get a Flat Tummy.

What is Auto Brewery Syndrome?

Auto Brewery Syndrome (ABS) is also known as gut fermentation syndrome or endogenous ethanol fermentation. This condition is also sometimes called “drunkenness disease”. In ABS, a person feels intoxicated or drunk without consuming alcohol. This is rare, but this happens when your body starts converting sugar or starch into alcohol (ethanol). It is tough to spot and diagnose.

It is also very easy to mistake Auto Brewery Syndrome for something else. It is really rare, and only a few cases have been reported in the last several decades. This happens inside your intestine or gut and can be caused by too much yeast in your gut.

Children and adults can both get this. It is caused by a number of things that promote the growth of yeast. Few of the causes include inflammatory bowel disease, poor nutrition, low immune system, diabetes and antibiotics. Your blood-alcohol level may be high if you have ABS. However, it is tough to spot as the symptoms include usual drunken behaviour and getting drunk with just a few drinks.

In the case of the unnamed construction worker mentioned above, it all started when he started taking some antibiotics for an injured thumb, back in 2011. He was diagnosed with the presence of Saccharomyces cerevisiae, also known as brewer's yeast that causes this; he was out on a no-carbs diet. After he failed to follow the diet rules, he ended up aggravating his situation.

(The above story first appeared on LatestLY on Oct 22, 2019 02:52 PM IST. For more news and updates on politics, world, sports, entertainment and lifestyle, log on to our website latestly.com).