Valeria Garcia wore a portable breast pump while modelling at the Marta Jakubowski show on Friday. 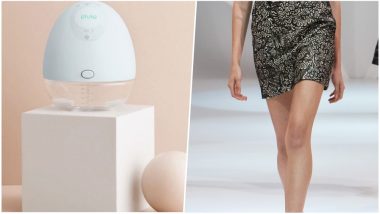 A model who walked the ramp at the London Fashion Week found a novel way to raise awareness about breastfeeding. Valeria Garcia wore a portable breast pump while modelling at the Marta Jakubowski show on Friday. The pump was a wearable, app-controlled one that was tucked behind the bra and the black blazer she wore during the show. The device is marketed by breast pump maker Elvie, who has revealed their range of “silent” portable pumps.

The Argentine model is a mother of two who gave birth to son Anton in June. The Elvie device that she sported helps mothers on the go to express milk, without having to go through the hassles of a traditional breast pump.

Model Valeria Garcia has walked down the catwalk at #LondonFashionWeek while using what's thought to be the first wearable breast pump #HeartNews pic.twitter.com/OASiVlK26z

A few months ago, another model Mara Martin made news for nursing her five-month-old child while walking the runway for Sports Illustrated. Although her move was lauded by many, some people on the social media also accused her of seeking attention. To break the stigma of public breastfeeding, and to desexualise the act, many celebs have posted pictures of them nursing their children and have been outspoken about their opinion about breastfeeding in the recent past.

Closer home in India, actress and model Lisa Hayden spoke about her experience after she posted her breastfeeding picture on Instagram in 2017. She recollects being slut-shamed by the trolls and being equated with a cow. Mira Rajput, wife of actor Shahid Kapoor, also recently expressed her opinion about breastfeeding her baby boy Zain.

Breastfeeding statistics around the world has not been very encouraging. According to the World Health Organization, three in five babies are not fed within the first hour of birth, putting them at higher risk for diseases. Many families substitute formula milk for breast milk. Increasing instances of elective C-section births have also contributed towards the dwindling breastfeeding stats across the world.

(The above story first appeared on LatestLY on Sep 16, 2018 06:42 PM IST. For more news and updates on politics, world, sports, entertainment and lifestyle, log on to our website latestly.com).