Mira Rajput Kapoor on Breastfeeding Zain: ‘It Is the Greatest Gift You Can Give to Your Baby’

She believes that the primary nutrition provided in the initial stage lays the foundation for the overall growth of the child. 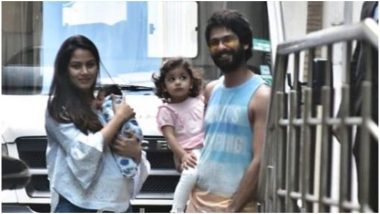 Mira Rajput Kapoor on Breastfeeding Zain: ‘It Is the Greatest Gift You Can Give to Your Baby’ (Picture Credit: Yogen Shah)

Shahid Kapoor and Mira Rajput's sweet little daughter became an elder sister on the 5th of September. The couple became proud parents of a little baby boy-Zain Kapoor. After the couple tied the knot in an arranged marriage set on July 6, 2015, Shahid and Mira are one of the most loved couples of the B-Town. Mira Rajput has been an amazing mother and has handled both her pregnancies like a boss and even when it comes to nursing her kids, she has given more than a 100 per cent to that. Shahid Kapoor Makes the Big Announcement, Reveals His Son’s Name As Zain Kapoor

She believes that the primary nutrition provided to a child in the initial stage lays the foundation for the overall growth of the child. In a recent interview with Zoom TV, Mira Rajput talked about the importance of breastfeeding and was quoted saying, 'I have spoken about the importance of feeding the baby in the past too. I was extremely religious with Misha and I am going to do the same with my newborn. It is the greatest gift you can give your baby.'

She also shared her thoughts on the importance of sleep for new mommies. In the same interview, she also said, 'Also important is to sleep whenever the kids allow you to because that will no more be in your own hand.'

It is very important for the new mothers to take care of their health as much as they do of their child's.  Mira Rajput also spoke of the breastfeeding being the greatest gift you can give to your child and that she was religiously dedicated in the time of Misha and is going to do the same in the case of Zain as well. Did you see Zain Kapoor's First Pic? And Shahid Kapoor, Mira Rajput and Misha Have a Cute Family Moment With The Newest Member?

(The above story first appeared on LatestLY on Sep 12, 2018 01:35 PM IST. For more news and updates on politics, world, sports, entertainment and lifestyle, log on to our website latestly.com).