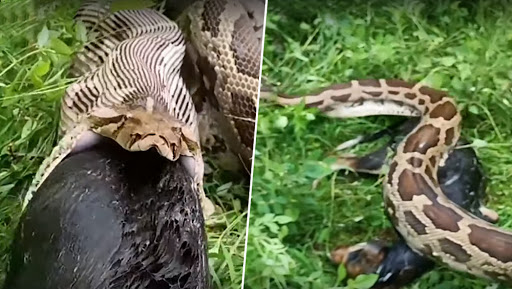 Interesting videos are liked by netizens on social video, while there are some videos which are gross but still gain attention. In such a video a 13 foot-long rock python was caught on camera swallowing a stray dog whole. According to the local wildlife enthusiast in Udaipur in Rajasthan, who shot the video, the python swallowed the canine's body within 14 seconds and then briefly rests before heading out. Hungry Snake Eats Itself, Swallows Almost Half of Its Body (Watch Rescue Video)

The Daily Mail reported that the wildlife expert who shot the video on his mobile phone said:  "On Wednesday morning, we were on an animal rescue operation. On the way, we saw some people disturbing a 13ft-long rock python that had eaten something. As we got closer to the reptile, it was spilling out the kill which was a street dog."

He added, "Pythons take almost half an hour to swallow - and they can swallow the prey more than its diameter because their jawbones are not connected. It takes a lot of energy to do this manoeuvre, so if they sense a predator nearby, they will regurgitate their prey instead to conserve their energy and flee."

This is not the first instance. Experts believe that excessive deforestation has been leading to a serious imbalance in the ecological system which has forced the reptiles and other wild animals to come closer to human habitats. These reptiles have started to prey on livestock like dogs, goats and calves.