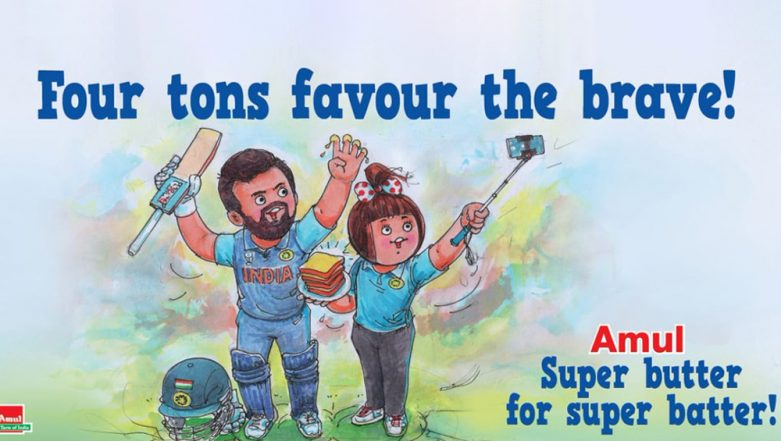 Amul, an Indian cooperative dairy company, shared a photo on their Twitter account to congratulate the right-hand batsman. In the animated photo, an animated figure of Rohit Sharma can be seen raising his bat. Have a look at the photo below. Rohit Sharma Beats MS Dhoni's Record of Most Sixes in ODIs for India, Also Breaks Sachin Tendulkar's This World Cup Record During IND vs BAN CWC 2019 Match.

Keep it up Rohit!

“#Amul Topical: Rohit Sharma, first Indian to score four centuries in a World Cup!”, the official account of Amul wrote along with the photo. “Four tons favour the brave! Amul Super Butter for super batter!”, the text on the animated photo read.

Sharma, who is the leading run-scorer in ICC Cricket World Cup 2019 at present with 544 runs in 7 innings, equalled Kumara Sangakkara's record of scoring four centuries in a single World Cup tournament with the century against Bangladesh. The Sri Lankan left-handed batsman had achieved the milestone in World Cup 2015.

Hitman’s century against Bangladesh enabled victory to India by 28 runs and Virat Kohli-led side also fixed their semi-final spot in CWC 2019, sending Bangladesh out of World Cup 2019. While everyone is cherishing Indian ODI vice-captain’s fabulous batting in ongoing World Cup 2019, Amul found a nice way to applaud him on social media through the post.