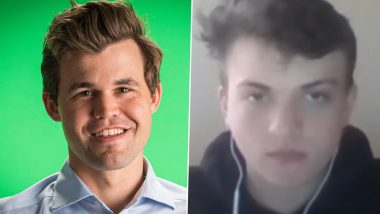 The world of chess is seeing the biggest scandal it has had in its history. People’s interest in the game of chess has grown monumentally in the past few years. From the chess streams that are a mixture of actual game places and a lot of fun banter to shows capturing the genius of chess like The Queen’s Gambit, there are various interesting twists and turns that a game of chess can take. Well, all those stories can be left behind in light of the newest chess scandal in the market. One that involves anal beads, vibrating socks and now a FIDE investigation. And while it may sound like a plot of a show, this is all that occurred at the Magnus Carlsen vs Hans Niemann at the Sinquefield Cup played in early September. As social media floods with bizarre theories and mind-boggling facts about Hans Niemann, here’s everything you need to know about Magnus Carlsen vs Hans Niemann’s chess match. Magnus Carlsen Beats Indian Grandmaster Arjun Erigaisi to Win Julius Baer Cup.

Chess grandmaster Magnus Carlsen, the world chess champion, broke his 53-unbeaten matches record with 19-year-old chess grandmaster and Twitch streamer Hans Niemann. After this defeat, in their next tournament meet-up

(in the Julius Baer Generation Cup, an online chess tournament), Carlsen resigned on the second move, leaving chess fans stunned. And these withdrawals led to two main arguments — the insinuation that Niemann cheated and the other rumour that Carlsen just could not handle being defeated by the 19-year-old. This clash led social media to do what it does best — spread chaos.

While withdrawing from the championship, Magnus Carlsen insinuated that there is more to the story and he cannot openly speak up about the reason behind his decision. Speaking at the Meltwater Champions Chess Tour on September 22, Carlsen said that he would speak about his one-move resignation against Niemann only after the Julius Baer Generation Cup. After winning the event, on September 27, Carlsen released a detailed statement where he freely spoke about the reasons he believed Niemann cheated in their game. He also claimed that Nieman has cheated more than he has publicly acknowledged.

Get The Full Statement Here

My statement regarding the last few weeks. pic.twitter.com/KY34DbcjLo

Well, as we mentioned before, Hans Niemann grew to fame as a Twitch streamer and has been streaming various chess games online. What people also need to know is that the teenager accepted publicly that he has been caught cheating before. He confirmed that he had used computer assistance to win ranked games on Chess.com, despite attesting that the incident occurred when he was 16 and was the “single biggest mistake of my life”.

Things began to particularly stir when Chess.com decided to step up and made an important statement — by removing Hans Niemann from the platform. The platform cited that they have shared various detailed evidence for their conclusions and decisions and expected Niemann to respond.

Where We Stand Now

While the world waits for the findings of this investigation and Hans Niemann continues to maintain a deafening silence on his socials, chess fans on social media are surely at work — trying to put their own investigations together. As we wait for the truth to come out, one thing is clear — this scandal will surely be talked about for decades to come in the chess community.

(The above story first appeared on LatestLY on Oct 02, 2022 03:30 PM IST. For more news and updates on politics, world, sports, entertainment and lifestyle, log on to our website latestly.com).