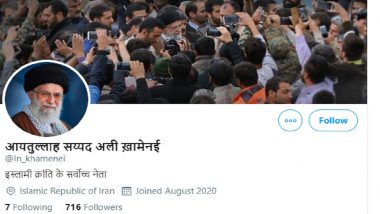 Tehran, August 9: Iran's supreme leader Ayatollah Khamenei on Sunday created a Twitter account in Hindi. Ayatollah Khamenei has accounts on Twitter in multiple languages, including English, Arabic and Persian. In his first tweet in Hindi, Khamenei wrote: "In the name of Allah, who is very kind and compassionate." Khamenei's Twitter account in Hindi has got more than 700 followers so far. George Floyd Killing Shows ‘True Face’ of US, Says Iran’s Supreme Leader Ayatollah Ali Khamenei.

The account follows seven other accounts of him in other languages. With accounts in multiple languages, Khamenei apparently wants to reach to a wider audience. He has been in the news because of his controversial tweets. His office often posts tweets condemning the Israeli regime for its alleged crimes, including appropriating Palestinian lands, and disregard for international law. His criticism of Israel is often seen as "hatred" for Jews. Donald Trump Imposes 'Hard-Hitting' Sanctions Against Ayatollah Ali Khamenei as Tensions With Iran Escalate.

However, in May this year, Khamenei's posted a clarification on Twitter. "Eliminating the Zionist regime doesn’t mean eliminating Jews. We aren’t against Jews. It means abolishing the imposed regime & Muslim, Christian & Jewish Palestinians choose their own govt & expel thugs like Netanyahu. This is ‘Eliminating Israel’ & it will happen (sic),” the Leader’s office said in a tweet in May 2020.

Here it may also be noted that Khamenei is considered the tallest leader of Iran and Shias. The Shia community constitutes nearly 25 percent of the Muslim population in India where Hindi is spoken in several states.

(The above story first appeared on LatestLY on Aug 09, 2020 07:06 PM IST. For more news and updates on politics, world, sports, entertainment and lifestyle, log on to our website latestly.com).