Barack Obama Birthday Special: From Being a Protective Father to a Loving Husband, 5 Reasons Why The Family Man Has Our Hearts! 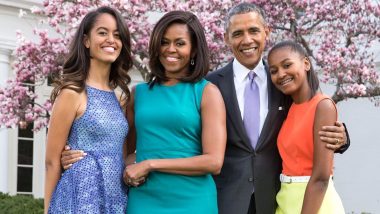 From sharing a few dad jokes during his Thanksgiving addresses to matching steps with everyone he met, Barack Hussein Obama has been Mr Cool throughout his presidency. He initially lived in Indonesia as a child and then his family to Hawaii. With a normal upbringing, he went onto become the President of the United States. He came to be known as the coolest president of all times for the way he goes along with people. Moreover, his care toward his daughters and love for his wife Michelle Obama, has also earned him the name 'family man'. On his birthday as turns 59, we bring to you some of the reasons why the family man won our hearts. 10 Inspiring Quotes of USA's Most Loved African-American Former President Barack Obama.

His cool quotient is something that made him even more popular among people. From breaking into a jig to having his way away with babies, he waved his magic wand everywhere. And his image he is going to be known as the coolest President every by the future generations. You may not agree with political decisions, but it is difficult to not look at his hilarious side.

1. His Chemistry With Wife Michelle Obama

I came to Chicago in my 20s, still trying to figure out who I was. It was there that I found my community and my purpose. Excited to be back here for the @ObamaFoundation Summit to hear some remarkable stories from folks around the world—and share my own. I hope you’ll tune in at obama.org

Barack Obama and wife Michelle are simply the biggest lovebirds we have ever seen. Their chemistry has been in the news ever since the day was elected as the President and walked on the stage with his family. Their PDA moments have often gone viral earning him the name 'family man'. Michelle Obama Quotes For Her 56th Birthday: Motivational Sayings By The 44th First Lady of US That Will Inspire You For a Better Tomorrow!

In every scene, you are my star, @MichelleObama! Happy birthday, baby!

To all who celebrate today, happy Easter from our family to yours! On this day of rebirth and renewal, let’s recommit to love and serve our brothers and sisters, especially those in need, in every way we can. Have a great day, everybody.

A protective father to daughters Sasha and Malia, he has often spoken about how his little girls have taught him about social media and a lot more. He is quite proud and always been the media's favourites.

3. His Equation With Children

There are a thousand photos of Obama posing with babies as if he were one of them. Throughout his presidency, Obama would often interact with people in the public and take babies in his arms and play with them. Photos of him posing with children in superhuman costumes have many-a-times gone viral.

How Cute is That?

His grin and uptown attitude garnered a lot of fans throughout his life. Obama continues to be known for being the people's President and handling stress with ease. Thanksgiving Wishes From The Obamas! Michelle Obama Shares a Beautiful Family Pic With Barack Obama And Daughters Malia-Sasha.

His Love For His Pets

Obama has worked as a civil rights attorney, community organiser, lecturer and professor. He sponsored and led the passage of Illinois’ first racial-profiling law. In 2007, Obama formally announced his campaign to run for president. He was elected president in November 2008 and served as the 44th president of the United States for two terms. In 2008 and again in 2012, he was named Time magazine’s 'Person of the Year'.

(The above story first appeared on LatestLY on Aug 04, 2020 11:00 AM IST. For more news and updates on politics, world, sports, entertainment and lifestyle, log on to our website latestly.com).