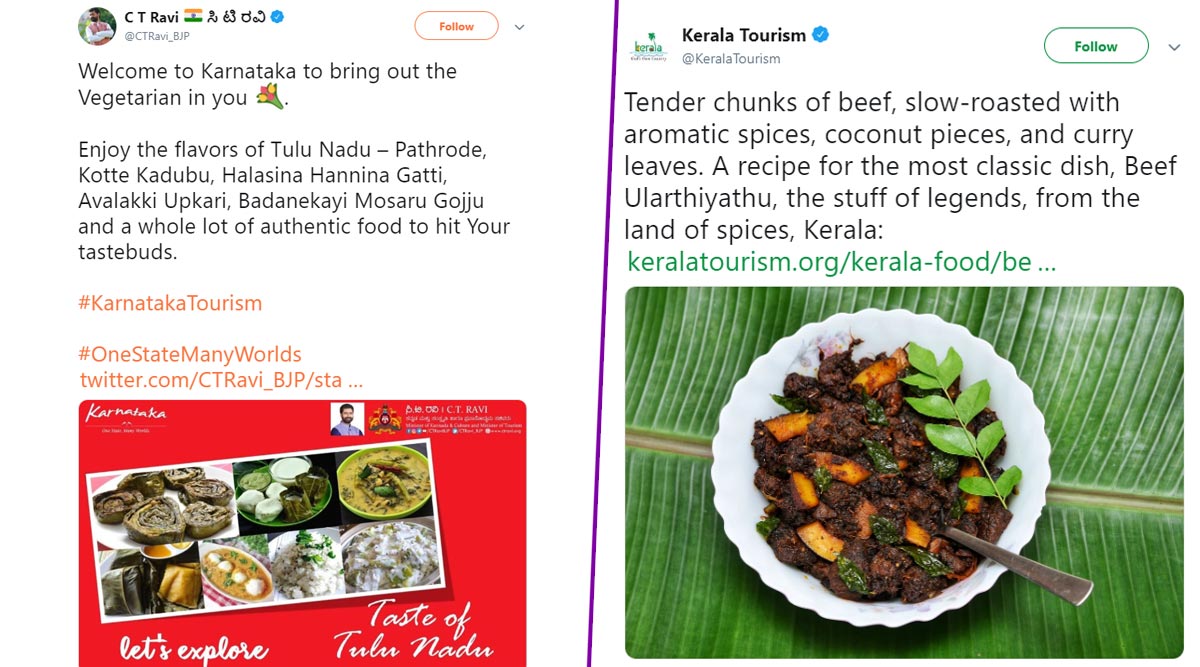 Thiruvananthapuram/Bengaluru, January 17: A war of words has erupted on Twitter after Kerala Tourism promoted a beef dish and Karnataka Minister CT Ravi reacted to the post. While a section of Twitter users criticised Kerala Tourism for promoting beef, the other group took swipe at CT Ravi for denigrating who eat it. When Ravi invited people to Karnataka for "bringing out vegetarian" in them, many named dishes made of beef in the state. Dilip Ghosh, West Bengal BJP Chief, Sparks Controversy For Asking Beef Eaters to 'Consume Dog Meat at Home'.

It all started with a tweet by Kerala Tourism on Wednesday. The department shared the recipe for making Beef Ularthiyathu in the tweet. "Tender chunks of beef, slow-roasted with aromatic spices, coconut pieces, and curry leaves. A recipe for the most classic dish, Beef Ularthiyathu, the stuff of legends, from the land of spices, Kerala (sic)," read the tweet. Reacting to it, Ravi first wrote: "Welcome to Karnataka (sic)". Tamil Nadu Man Posts Picture Consuming Beef Soup on Facebook, Gets Attacked by Mob In Nagapattinam.

As Ravi's tweet caused confusion, he posted another tweet which read, "Welcome to Karnataka to bring out the Vegetarian in you. Enjoy the flavors of Tulu Nadu – Pathrode, Kotte Kadubu, Halasina Hannina Gatti, Avalakki Upkari, Badanekayi Mosaru Gojju and a whole lot of authentic food to hit Your tastebuds (sic)." To those who thought Ravi was promoting beef with his first tweet, the Karnataka minister said it was against his faith.

"Come on Friends, how can You even think that I will support Beef. It is against my belief and faith. I realized that many of You were hurt with the Kerala Tourism tweet. My tweet was a sarcastic and silent form of protest against it.  Hence, I welcomed You to visit Karnataka (sic)," Ravi tweeted. Kerala Tourism's tweet and Ravi's responses triggered a Twitter war over the choice of food.

Try promoting Pork also. you will get a taste of your medicine.

Beef is the biggest reason for climate change, stop promoting it

Don't forget we Hindu can boycott you as well bcz we have so many destination for traveling..... Shame on you 😡😡@ippatel @JBMIS

I am disappointed, I thought to taste sea foods in my next visit to Tulu Nadu. But this Tourism minister suggesting as if entire Tulu Nadu eats only Vegetarian food. No Non-veg 🤤 @LavanyaBallal @SoansShine

beef and pork too is widely available and eaten - so stop spreading lies pic.twitter.com/vDnOjLwoQY

Welcome to Karnataka to bring out the foodie in you 💐.

Enjoy the flavors of Tulu Nadu –

Vegetarianism, veganism, eating beef, pork, fish, chicken, mutton, etc., are all part of the diverse food cultures of Karnataka. It will be nice if you also ensured all foods and food cultures prospered here. Pl organise a food fest where such diverse cuisines can be served.

While many Indians irrespective of their faiths consume beef, a large section of Hindus don't eat it. For them, the cow is a sacred animal, hence, its meat is prohibited for them.