Billie Eilish has dropped her latest single 'Lost Cause' a few days back and now, she has taken to her Instagram handle to share a few stunning pictures with her girl gang from the music video. However, her caption has stolen the show. 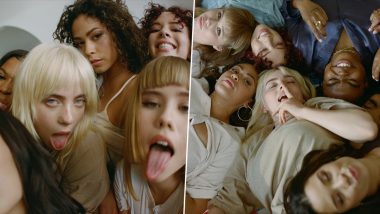 After releasing the latest single ‘Lost Cause’, American pop star Billie Eilish has made it to the news again. The ‘Lovely’ singer dropped her latest track ‘Lost Cause’ a few days ago wherein in the music video she can be seen goofing around, striking sexy poses, and eating snacks along with her girl gang during a slumber party. However, the song has prompted a few of her fans to accuse her of a special charge – ‘Queerbaiting’.  In the comment section of her music video, few of her fans were appreciating her while few had confusions. One of her fans wrote,"I loooveee billie but this kinda seems a bit like she's queer baiting yk what i mean??"

According to Yahoo News report, not only on YouTube, but her fans were also discussing about the same on TikTok; one of her fans wrote, "Acting sexual with girls to draw in more audience is gross." Now, after creating a lot of buzz on social media with her latest song ‘Lost Cause’, she has again managed to grab eyeballs with her latest Instagram post. The pop star has taken to her Instagram handle to share a fun post featuring her girl gang from the music video. And while sharing the same, she wrote, “I love girls.” Soon after she posted the same, several started doubting her again while few guessed that she is ‘Coming Out’ as a gay.

IS THIS BILLIE EILISH COMING OUT??!(/!,? pic.twitter.com/mfSrTBtvDo

k last tweet before i go for good, but cries i'm so so proud of billie eilish for coming out. i love her so much, and watching her grow over the years has made me so insanely proud pic.twitter.com/amFzzmVJIl

Hope She is Not Queerbaiting

However, Billie Eilish is not the only celebrity or pop star who has been accused of Queerbaiting, several other stars like Harry Styles, Ariana Grande, Taylor Swift, Nick Jonas, James Franco, and Tyler Posey had been accused of the same at various points in their careers.

(The above story first appeared on LatestLY on Jun 11, 2021 11:08 AM IST. For more news and updates on politics, world, sports, entertainment and lifestyle, log on to our website latestly.com).