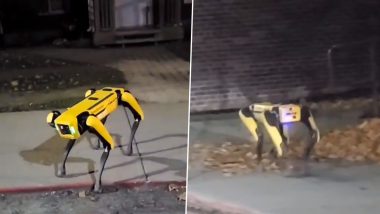 Boston dynamics Spot robots are quite famous. The four-legged dog-like robot has done many things, from herding sheep to cheering on baseball teams. Even during the coronavirus pandemic, the robots are reportedly protecting medical workers from possible exposure to the virus by being in the frontline. Now, a Boston Dynamics robot dog was spotted roaming on the street. While the bot is not yet considered harmful to humans, social media users are scared of watching the viral video, speculating that days are not far when we spot them armed, wandering on the streets. The video of the four-legged robot ambling down the sidewalk triggers fears among netizens as the clip garnered millions of views. Spot, the Four-Legged Patrolling Robot Will Now Remind People About Social Distancing Measures in Bishan-Ang Mo Kio Park, Singapore.

A Canadian Twitter user, @bloodtear posted a video of the Boston Dynamics Spot robot dog, wandering a city street. Though it is not clear where it was actually filmed, the video has surely garnered a lot of attention. The social media user taking the footage, was initially startled, but opted for a friendly approaching, addressing the quadruped with, “Hello friend!” The robot can be seen turning toward the cameraperson and appears to snap a photo before walking away. The video has gained more than six million views since uploaded, and the count is not stopping anytime soon.

guys look who i saw out on da street!!!:) pic.twitter.com/rPczxbWAkL

With the clip going viral, #Robot began to trend on Twitter. Netizens are concerned, if at all, the robot is next spotted with arms and intentionally or not, end up hurting humans. Many were filled with horror at the sight of the metal canine, while others found it adorable.

This is a clip that they show in a flashback about robots taking over movies. https://t.co/u0wK0asgqh

Drone and Robots to Take Over!

in a few years it won’t feel weird at all to see robots and drones everywhere https://t.co/3eGkDPeWqs

This is What Netizens Speculate

They're going to put a gun on this thing in the next five years and make it patrol the street to shoot anyone who doesnt pass it's suspicion check.

Boston Dynamics is creating those robots with military purposes. In other words, they are creating death machines do deploy in poor countries.

Their "cute" and goofy videos are a red herring to direct public attention away from their awful intentions.

This mf just the beta version of this pic.twitter.com/IPOj7H2hLz

Others Want to Go On a Ride With Spot!

Too Much Black Mirror?

y'all watch too much black mirror 💀💀

Boston Dynamics robot dogs have been deployed in Singapore to enforce social distancing during the COVID-19 pandemic. Some US police departments have also reportedly acquired their own. The four-legged model has been available to the public since June, 2020 for anyone to buy. Spot, the robot contains advanced military technology.

(The above story first appeared on LatestLY on Sep 26, 2020 12:20 PM IST. For more news and updates on politics, world, sports, entertainment and lifestyle, log on to our website latestly.com).