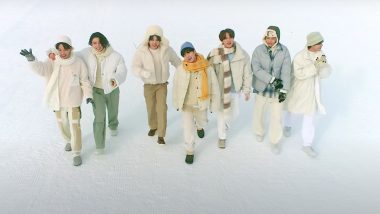 Ahead of the release of BTS’ annual winter package, the Big Hit Entertainment released some behind the scenes photos, and ARMYs are gushing over the singers’ look. The South Korean entertainment company who manages BTS have taken to Twitter to share some adorable pictures, and they are just wow! RM, Jin, Suga, J-Hope, Jimin, V, and Jungkook, and their looks—a combination of dark and colours encapsulates all the goodness and positivity that the members are famous highlighting. Jungkook’s hairstyle, Winter Bear Taehyung and his adorable expressions, and more, K-Pop fans are going crazy. Social media platforms are flooded with behind the scene pics shared by the entertainment company, as fans eagerly wait for 2021 Winter Package.

BTS have a lot on their plate right now! The boys are dropping a special version of BE this month. Besides, they have also been nominated at the Grammy Awards, scheduled to be held next month. In the middle of all these, the K-Pop band’s annual winter package is about to release. Last month, the BTS released the Winter Package 2021 teaser video and it has everything! From dark to chill and cosy vibe, the teaser clip surely enthralled K-Pop fans.

The winter package is actually merchandise consisting of a few items that give an insight to the band. It consists of various items such as DVD, photo book, behind the scenes and others. The Big Hit Entertainment released the behind the scene photos of BTS 2021 winter package. The pictures are from the scenic beauty of snow-capped mountains, and they are gorgeous. Besides, fans cannot stop talking about Jungkook’s blue and pink hairstreaks.

#BTS Behind the Scenes of 2021 Winter Package Pt. 4 pic.twitter.com/e2QudI7stJ

BTS has also released ‘Dream On’ TinyTAN animated video that has won purple hearts from fans. The K-Pop band keeps their fans entertained, no matter how! A few days ago, Jimin was captured adorably sliding down the snow hill, which received huge reactions from the ARMYs.

(The above story first appeared on LatestLY on Feb 04, 2021 07:03 PM IST. For more news and updates on politics, world, sports, entertainment and lifestyle, log on to our website latestly.com).