BTS new single titled, ‘Dream On,’ is created with the sole purpose to spread hope and happiness. The video is filled with touching moments and tiny details and references to the band’s previous songs, and other relatable things, that has impressed ARMY. 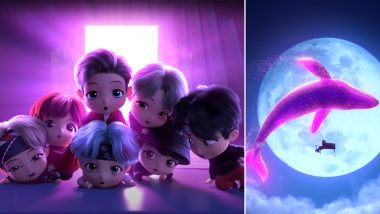 ARMYs rejoice, as the Bangtan Boys, aka BTS just dropped its latest TinyTAN animated music video, just in time to spread joy and magic in your happy dreams. Ah, it’s so beautiful! Even for those who may not be a K-Pop follower, will instantly smile watching the song. The new single titled, ‘Dream On,’ is created with the sole purpose to spread hope and happiness. The video is filled with touching moments and tiny details and references to the band’s previous songs, and other relatable things, that has impressed ARMY. The fans definitely cannot stay come. At the time of writing this, the animated song has already received 4.9 million views and winning purple hearts from the ARMY.

BTS never fails to create a buzz on the internet with everything they do. But their songs receive huge love as the K-Pop band pays attention to the details to make it relatable and memorable. 'Life Goes On,' the single from BE which was released last year too received enormous love for spreading hope in the times of despair. The latest TinyTAN animated music video has the same motive too. The song begins with the girl wearing a T-shirt with a whale on it, referencing “Whalien 52,” a BTS song about the “loneliest whale in the world.” A flying kiss from TinyTan magically awakens the whale.

The girl can be seen flying through the night with TinyTAN, a billboard flashing their words, “hope right here,” transformed wearing a purple dress, and as an aspiring pianist, she plays the piano, while surrounded by stars that resemble ARMY bombs at BTS’ concerts. You cannot get enough of the BTS song, The K-Pop band gives fans a magical experience through this animated video, giving hope to everyone that better days are going to come. J-Hope Birthday Goals! BTS ARMY Trend #PartyWithBTS As Fans Stream Their Favourite K-Pop Songs, Hope World, Share Spotify Playlist and More, Ahead of Jung Ho-seok’s Special Day.

Yes, I am happier after this. Thank you #BTS_twt 💜🥰@BTS_twt

Did You Get the Reference Too?

Zero o'clock is one of my favorite songs from the album of "map of the soul:7" then this tinytan | animation dream ON vid that BANGTANTV posted 7 hours ago really hit my heart!!!!!😭 pic.twitter.com/vkrsbo2CXo

It is a beautiful animation, full of true emotions and constant joys. Thank you BTs for so much happiness, for so much love, I purple you 💜. 💬 Final message from TinyTan

"When this song is over, we hope you'll be a little happier" pic.twitter.com/XyCmFOWbLg

Yes, I am happier after this. Thank you #BTS_twt 💜🥰@BTS_twt

ARMY is in love with the latest song, and we won’t be surprised if it creates some new records. “When this song ends, May you be a little happier,” reads the note at the end of the emotional video, packed with hidden meanings and references to BTS’ older songs. The music video will surely make you cry happy tears.

(The above story first appeared on LatestLY on Jan 16, 2021 09:39 AM IST. For more news and updates on politics, world, sports, entertainment and lifestyle, log on to our website latestly.com).